Why EDSA People Power did not represent the nation 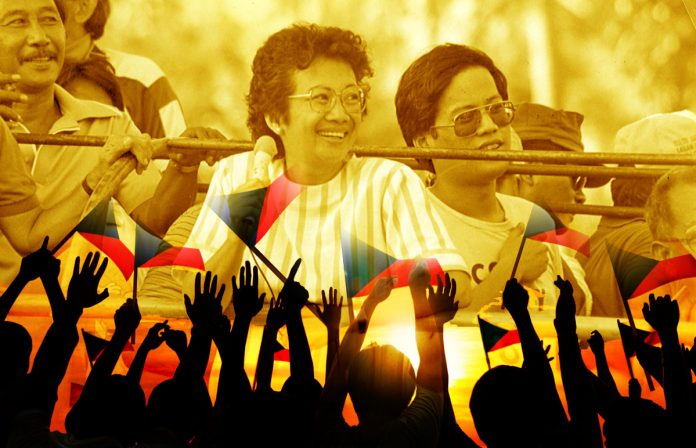 An estimated 2 million Filipinos in Quezon City, Ortigas, Baguio, Ilo-Ilo, Davao, and Cebu, joined the People Power in 1986. The population of Filipinos then was 55 million. Even if we triple the number of those who wanted Marcos out, it still will not represent the entire nation.

A series of massive rallies followed after the Marcos family left. The growing number of Marcos’ own “People Power” threatened Cory Aquino’s government. Her only recourse was to prevent the strongman to return to the country for as long as she can.

A new generation of “Marcos loyalists”

Marcos loyalists grew exponentially after 36 years. In 2022, militant Robredo supporters and celebrities all over social media criticized Marcos supporters for their “ignorance” and “stupidity.”

The voter demographic of Marcos Jr. included those born during martial law as well those who lived to tell the Marcos years.

Maid in Malacanang and Katips movies

A month after BBM was sworn, the pro-Marcos movie, Maid in Malacanang (MIM), was produced. Katips, a recent addition to the long list of “anti-Marcos movies,” was pitted against it.

MIM earned 41 million pesos on the opening week while Katips had 800,000—despite receiving numerous awards. Katips was produced just in time for the 2021 election.

WHY FILIPINOS WANTED MARCOS BACK.

2. EDSA People Power was one color—not one nation

Filipinos have begun to think that the story of the EDSA protest is “unreasonable,” said historian Lisandro Claudio in an ABS-CBN article.

“One of the reasons why they think we are so unreasonable is because we never give Marcos credit.,” said Lisandro Claudio, who supported Robredo.

“It has been exclusionary and elitist. The poor were not there, or if they were there, they were betrayed shortly after,” he added.

“The people power movement has been an Imperial Manila phenomenon. Their (the elites’) playing field is Edsa.” Journalist Armando Doronilla said in 1986.

For decades, the “Yellow Revolution’ has depicted EDSA forces as “good” and Marcos as “bad.” But not everyone is convinced. A huge part of the population prefers red over yellow.

The 36th anniversary of People Power

In 2022, only 4,000 people convened at EDSA Shrine to commemorate the 36th People Power. Bong Bong Marcos filed his candidacy in October 2021. The threat of a Marcos return would have triggered massive support for “EDSA 36,” but it did not.

A series of protests to bring them back followed. It resounded all over the country. A foreign documentary showed massive rallies that live to tell how the people loved the Marcoses and it still holds true, even after two generations.

“I do not want him here,” Cory

The strongman was ready to face his accusers, however, they were brought to Hawaii instead of Paoay, Ilocos Norte.

In an 2018 interview with Marcos’ former Defense Minster, Juan Enrile said it was Cory who wanted the Marcoses out of the country.

Cory called Ambassador Bosworth. “I remember Cory shouted over the phone, “no, I do not want him here, take him out of the country.“” The Americans didn’t know what to do with Marcos and they followed Cory, Enrile said to BBM during the 2018 interview.

BBM/Duterte rallies were to contend with, but Robredo/Pangilinan’s PasigLaban on March 20, 2022, was impressive. A sea of pink with smartphones lit Ortigas Center’s Emerald Avenue and adjoining streets.

The rally was an estimated 137,000 people, according to the Pasig City police. The anti-Marcos rally in 1986 was at least a million. The PasigLaban may be reminiscent of People Power, but the numbers are still too small to compare to EDSA 86.

Marcos Jr. had a similar number in vote-rich Cavite with about 140,000 supporters. On the other hand, Robredo had 50,000 supporters who attended her campaign.

Still, Robredo is a favorite among business groups, universities, and religious groups like Christ Commission Fellowship (CCF), whose church leaders openly supported her.

Pink is the new yellow

Clearly, not everyone is a fan of the color yellow. Not even Leni Robredo, the opposition’s best bet, wanted to be identified with it. She dropped yellow for pink.

POLITICAL PARTIES IN THE PHILIPPINES.