America and Israel in End-Time Prophecy 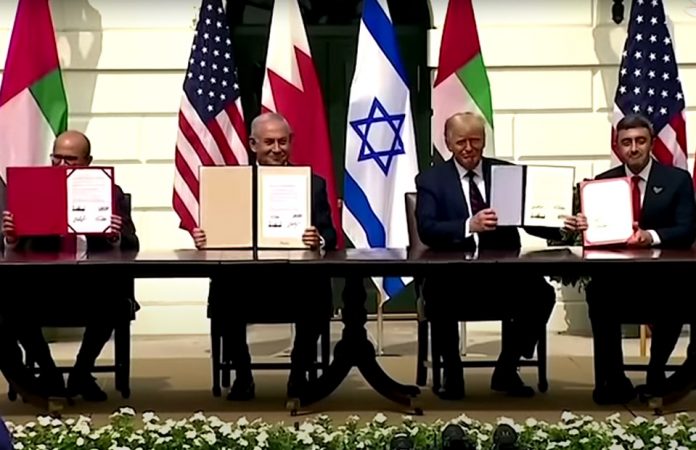 President Trump’s “Mother of all peace treaties” in the Middle East, part of a Biblical prophecy?

In 2020, US President Donald Trump forged a peace agreement between Israel and UAE. Bahrain was also present in the ceremony suggesting other Arab countries may do the same.

Trump’s eyes set on establishing stability in the region. What he is doing is politically impossible, given the Muslim’s hatred for the Jews.

The establishment of modern Israel in 1948 was a fulfillment of Isaiah prophecy, and so are the peace treaties, and Trump’s decision for Jerusalem in 2018

In 2018, President Trump moved the embassy from Tel Aviv to Jerusalem. He was criticized for it, but many see it as part of a critical key toward end-time prophecy.

Many see the peace covenant will precede the rise of the Antichrist, Armageddon, and the return of Jesus Christ

Prophetic evangelist Paul Begley said the signing of a covenant, like the agreements “between the UAE and let’s say Bahrain, and then Qatar… Oman, Morocco, Saudi Arabia, and right on down the line, become a covenant with many.” He was referring to a prophecy in the book of Daniel.

Great valley prophesy: The giant crack in Kenya in 2018

According to the Bible, Jesus will return and save His people. He will set foot on the Mount of Olives, Jerusalem (Acts 1:9-12; Zechariah 14:4-5). The mountain will split as war wages against Israel.

Christians connect the giant fissure in Kenya’s rift valley that began to crack in 2018 as a foreshadowing of the “great valley prophesy.”

For the mountain of Israel to split, the African tectonic plates must move. Israel, along with Lebanon, Egypt, and countries in Africa, sits on top of this plate.