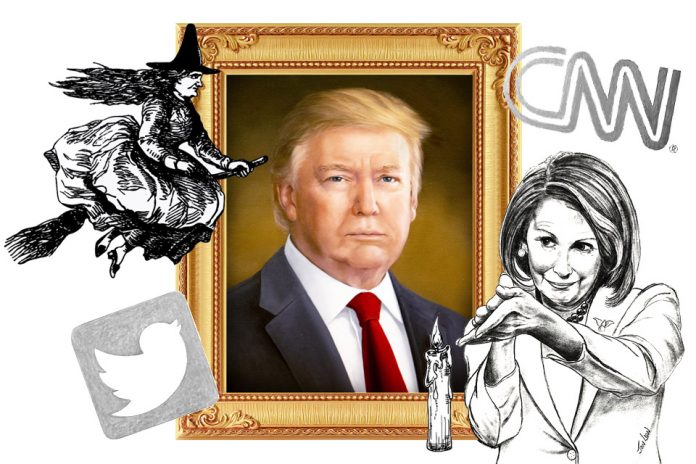 Trump mocked, even before he ran for President, the first time

Even before the 2016 election, ‘Trump hatred’ spewed in mainstream media. As an ex-President, hatred continues. Left-Liberal-Democrats want to be impeached and don’t want him buried with honors, even though he’s still alive.

Worse than the pejorative is that Trump fans branded ‘racist bigots and xenophobes.’ Candice Owens rips Democrats as ‘the party of hate, intolerance, and violence,’ she said.

In 2017, Comedian Kathy Griffin, in a photoshoot, beheads a Trump paper mache head complete with fake blood. The gory message was clear—she hates the President and instead supports “Gore.”

Griffin is a liberal celebrity who mocked God by saying “Suck

Jesus” when she received an Emny Awards in 2007.

2017, Madonna cursed Trump at the Women’s March. In the same year, Meryl Streep used the Golden Globes platform to criticize him, especially how Trump criticized a disabled reporter.

Likewise, Allysa Milano has been the poster child of anti-trump sentiment. In 2019, Robert De Niro dropped the f-bomb live on CNN.

Trump’s star on the Hollywood Walk of Fame smashed, again

2018, Austin Clay, a 24-year-old white male, was booked on felony vandalism charges for breaking Donald Trump’s star and using an ax on the Hollywood Walk of Fame.

Smollett told police that his (fake) attackers yelled, “This is MAGA Country,” a reference to “Make America Great Again,” that Trump and his supporters often use in campaigning. In 2022, Jussie was found guilty of staging a fake hate crime.

2020, “Trump is worse than Hitler,” Dr. Bandy Lee, a Yale-affiliated forensic psychiatrist touted as a “mental health expert.” She’s been targeting Trump since 2016, according to The Blaze.

2020, a P.R. Conservative group posted a video of a man who stepped out of the car and viciously stabbed a Trump/Pence campaign signage. The ad was erected at Juan Tabo, Albuquerque, New Mexico.

A former President Obama staff member deleted a tweet on Friday, suggesting that she hopes President Donald Trump dies after he announced that he tested positive for the novel coronavirus. [Newsweek]

Melonie Hicks, Executive Director of the Pioneer City County Museum Texas, posted on her Facebook, “I hope every single one of you pieces of s**t that votes republican dies today.” [KTXS]

Police in Boulder, Colorado, reported that a woman allegedly attacked a young boy riding his bike while carrying a pro-Trump sign. The woman approached the 12-year-old boy and then started to punch him “in the back of the head and the arms,” apparently for supporting Trump with his sign. [CBS Denver]

Salon’s blog described Trump supporters as a ‘dangerous threat.’ If Biden wins, Trumpism will survive the election and continue to be an existential threat. Similarly, threatening letters reportedly were sent to Trump supporters in New Hampshire [WMUR-TV]

MSNBC’s Keith Olbermann said Trump SC appointee Amy Coney Barrett (and others) should be ‘prosecuted’ and ‘removed from our society.’ ACB is a conservative catholic who is anti-abortion. Olbermann referred to Trump’s supporters as “maggots.” [Fox News]

CNN’s Reza Aslan tweeted all Trump supporters “must be eradicated from society” and Trump. She also said the “MAGA hat is a KKK hood.” [The Federalist]

Trump supporters “should be hit”

Democrat Rep. Cynthia Johnson threatened Trump’s backers to be careful. “For those of you who are soldiers, you know how to do it… Make them pay.” She urged people to “be smart” and “hit them (Trump supporters) in the pocketbook.” [Click Detroit]

In 2019, Jussie Smollett faked a hate crime incident in Chicago. Many Democrat senators twisted their support for the Black actor.

BLM organizer, Prof. Melina Abdullah, referred to Smollett’s indictment in 2021 as the result of a “Police lie.” The Chicago police were exonerated after evidence showed Smollet lied. In 2022, he was imprisoned for staging the attack.

2020, Marshall University in Huntington, West Virginia, took action against an assistant professor caught on video saying she wished supporters of the President would die before the election.

Witches and warlocks hex Trump, his appointees, and supporters

Nearly $15 million total of tax payer’s money was spent on an impeachment.

CONSERVATIVE AMERICA IS UNDER ATTACK.

Canceling Trump continues, even as an ex-President

Psychiatrists weigh in on Trumpism

IS TRUMPISM ERA OVER?