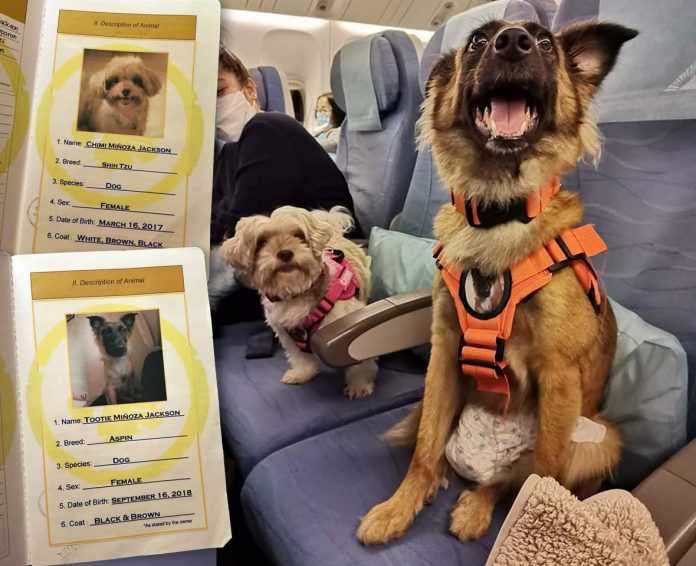 Yes, your furry friend, family pet, or pupper companion can ride with you on the plane, uncaged and beside you. This is what a Pinay furmom Diah Haberia Minoza-Jackson did when she recently moved to the USA. She couldn’t leave her fur babies behind.

Just like a regular passenger, except with the lease, got on the plane greeted by flight attendants on board the Philippine Airlines last October 2020, PhilStar reported.

Minoza-Jackson said processing papers for her puppers was easy. Unlike before, animals were treated, well, as animals — caged below the deck.

The puppers behaved during the entire flight

The “Minoza-Jackson family” traveled for 13 hours from the NAIA terminal to California. Chimi slept almost the entire flight while Tottie was awake for at least eight hours.

Although Diah’s dogs didn’t have any training, they were behaved dogs and didn’t bother anyone, except for cuteness overload

Naturally, fellow passengers were delighted to see the furry duo. Since Diah’s companions were E.S.A., she wasn’t charged for their seats!

Before migrating, Minoza-Jackson served in the Philippine Army for seven years. She filed for an honorable discharge to migrate to the USA to be with her husband, who works in the US military.

Today, even the Pilots couldn’t resist having doggies on board. Of course, there’s a caveat. Diah’s doggies were allowed because they were considered as “Emotional Support Animals” or E.S.A. Plus, they were small and cuddly (well, all dogs are cuddly).

Getting legal passports for your dogs or cat is not a requirement when entering the United States. However, getting their own “pet passport” or “National Pet Identity” is highly recommended.

USA Pet Passports is a term used for pet documentation, think if it as their I.D. All information needed by immigration will be in the booklet, and entry will be a breeze.

This furmom from Taguig City migrated to the United States together with her doggos Tootie and Chimi.

Animal transport by air is now restricted to dogs and no longer for any other animals. The decision came after rampant abuse of passengers using other animals as support, when they clearly not.

Yes, it is worth going to the Art Institute...
Travel and Vacation

Leda and the Swan

Art Institute of Chicago: Leda and the Swan Leda and...