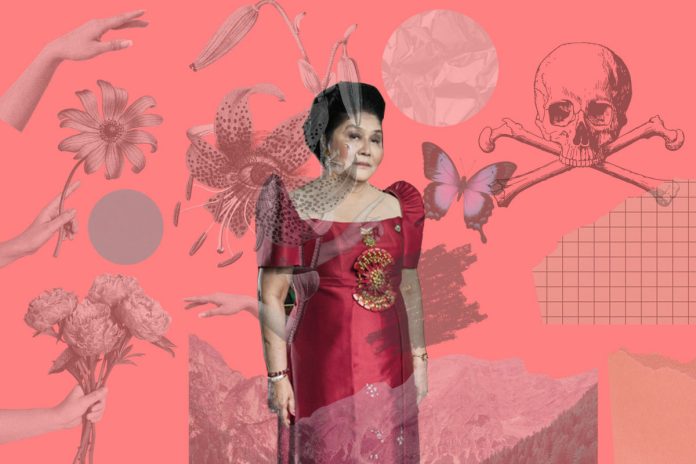 The “sins” of Imelda Marcos: The skeleton behind her closet

Forced to exile to Hawaii in 1986, the world was in disbelief after the Yellow Movement exposed the evils of the Marcoses. Still, the “Queen” was acquitted, but not without the media giving her the titles of “Steel Butterfly,” the “Kingmaker,” and one of the world’s most glamourous women—with pun intentions.

The family was able to return in 1991 after Corazon Aquino ended her term. They had three missions: To face their tormentors, bury Ferdinand, and for a Marcos to return to Malacañang as a president.

Three decades after the revolution, her husband, the “dictator” Ferdinand, was buried with his secrets at the Hero’s Cemetery.

According to Martial Law victim and former Congresswoman Etta Rosales, “She is using the body for political purposes because her big dream is to restore the greatness of the Marcos family, and it can only be done if you give him a hero’s burial… getting one of the children to run for the presidency… vindicate the family’s honor and name. Except that the Filipino people will not allow that to happen.”

People Power for the Marcoses

In 2022, more than 31 million Filipinos voted for the return of the Marcos family. Not necessarily because the family was exonerated nor because Marcos Sr. was given a hero’s burial—but because the house of Aquino fell.

The once-mighty Liberal Party was reduced to a lone Senator as the rest of the opposition stalwarts retired or did not win. Borking the Marcoses didn’t work.

Imeldific: The standard of beauty and living

Considered the father of modern investigative journalism, Jack Anderson described the First Lady as the world’s most glamorous woman.

Cosmopolitan magazine’s December 1975 issue ranked Imelda Romualdez Marcos as one of the wealthiest women in the world, along with Dewi Sukarno (Indonesia), Farah Pahlavi (Iran), and Queen Elizabeth II (the U.K.). [Press Reader]

She collected antiques and paintings and hoarded diamonds and designer jewelry from Paris to satisfy her queenly aspirations. All from “stolen money” from the people, according to the PCGG.

The edifice complex of Meldy

According to author Beth Day Romulo, Imelda’s personality changed after Ferdinand cheated on her. She became a strong-willed woman with visions and dreams, perhaps for the people and herself.

Romulo also said Meldy had an “edifice complex.” She loved buildings. At one time, Imelda called overseas and told Beth she was going to buy the Crown Building in New York. She purchased four more buildings and turned one of them into the Philippine Center in New York.

“When she saw something she liked, she’d take it,” said Beth, including shipping wild animals from Africa to the Philippines to create a “paradise” for the people.

In 2017, news claimed she is the world’s richest woman, worth US$280 billion. Vera Files verified the information and said it was fake news. Marcos is nowhere in the lineup of Forbes Magazine 2017 edition.

The wife of an uber-rich treasure hunter

On the flip side, Imelda is innocent. She came from a decent family and became the wife of an uber-rich man with gold stashed in the wall of his house from his treasure-hunting days. [Rita Gadi]

In 1971, another treasure hunter, Roger Roxas, discovered billions of dollars in gold and gems. They were part of the Yamashita treasure hidden in the jungles of the Philippines. He also claimed that Ferdinand Marcos stole the gold bars.

Rumor is that Madame Imelda frequently chartered Philippine Airlines flights on a whim. She went to New York and Paris to shop—together with a long list of an entourage that included her “blue ladies.”

The First Lady used her travel resources wisely. For example, she often dropped by uninvited at the White House or visited a politician in another country to forge an informal trade alliance or a cultural pilgrimage. [Wikileaks 1976; Wikileaks 1974]

The side trip could be a shopping spree that can take her anywhere from the United States to Milan, Italy, or Paris, France.

A report by Washington Times said that her husband Ferdinand has taken over the national airline—without paying a cent to its former owners, who handed him a $3 million flight bill.

Using an inflation calculator, that amount would be about $13,449,202 or 716 million Philippine pesos today.

Imelda was known for hosting glamorous parties and hobnobbing with the local elite and the wives of political leaders. A smart move, she was able to force her way into international political events.

Naturally, it came with more taxpayer money, and all of these were justified by bringing in investors to the country and placing the Philippines at the world’s center stage.

Protocol officers in the White House grit their teeth every time Imelda Marcos shows up because she often breaks protocol. She also became the laughingstock of the British Royal Family. Princess Margaret allegedly made fun of her.

Hiding the dirt behind walls and paints

Imelda Marcos is perhaps the most accomplished first lady of the Philippines. She created jobs, established housing for the poor, and introduced the Kadiwa “farm to table.”

She brought the country’s raw materials to Europe and supported export. And, of course, Imelda elevated the country’s art and culture that can compete with the best of the best.

In all these, she was criticized for dressing up for the world but covering up with brick walls and color paints the country’s growing poverty.

In Marikina, families were forced to repaint their homes at their expense. Near the Makati Commercial District, walls were built along the highway to cover the slums in the metro. In Manila, illegal settlers were forced to remote locations without a livelihood guarantee.

In Tondo, more than 400 families were forcibly relocated to a small housing project, and their houses were demolished because the IMF-World Bank meeting was about to take place in 1976. Imelda was worried that tourists might see such eye sores.

According to a New York Times report, the eviction caused growing embarrassment for IMF-World Bank. Tondo was a pet project of IMFWB for urban renewal, to which they gave the Marcos government $32 million.

The assasination of Ninoy Aquino

It is no secret that Marcos would like to see his wife succeed him. The only person that could threaten her succession would be the return of Benigno “Ninoy” Aquino Sr. reported Jack Anderson.

“Secret intelligence reports suggest cautiously that the assassination of Filipino dissident Benigno Aquino in Manila might have been ordered by First Lady Imelda Marcos, without her husband’s knowledge.” [CIA]

Rumors were that one of the Marcoses’ most loyal allies, Chief of Staff Gen. Fabian Ver, had something to do with the death of Aquino Sr. and that Imelda was too frightened of what could happen should Ninoy return to the country.

In 1984, the Agrava Fact-Finding commission reported that the military was behind the assassination that involved Fabian Ver but was later cleared. [New York Times]

Cory Aquino’s estranged cousin, Danding Cojuangco, a Marcos loyalist, was also involved by Paulo Martinez. Martinez was one of the convicted conspirators of the assassination. Cory later pardoned him. [Martinez transcript]

In 2015, the last surviving member of the Agrava commission, Sen Ernesto Herrera, said they found no sufficient evidence to link Ferdinand, Imelda, and Cojuangco to the killing of Ninoy Aquino.” [ABS-CBN]

Imelda is unapologetic in showing everyone how she defines what is beautiful. On the other hand, she was also creating a beautiful name for the country and making it known that Filipinos, too, can be world-class.

In a 1987 Playboy interview, Imelda said:

“We are part of the achievement of being a god… that is what we are about now. An ordinary mortal would not be able to stand it. Our statements now have to prove that we have not gone back to being ordinary mortals.“

“I have to flaunt, practically flaunt love and beauty so that the 50 million Filipinos will see what is to love and what is to positive feelings and what is perfection,” she said in a CBS News report.

We have not gone back to being ordinary mortals.

Dubbed the most expensive party ever, the former Shah of Iran hosted his country’s 2,500th anniversary in Persepolis in 1972. Among the guests were the nobilities of Europe, Emperors, Sheiks, Kings, and our own “Queen Imelda.”

The First Lady of the Philippines had three handmaidens and a large sixteen people retinue which may have cost a lot of taxpayer money.

Imelda’s hairdresser was ready to don her ‘signature coiffure’ with a beautiful diamond-studded tiara. However, a protocol officer told her that only “titled women” could do so. Unfazed, Imelda wore it upside down as an accessory.

Wearing a sash and medals of order and honor, she turned heads and pulled off a queenly stunt. Filipinos gasped with delight. After all, Imelda has always been stunning and brought pride to the country with how she carried herself and won diplomatic ties with it.

She may not have descended from royalty, but her aspirations remind the ordinary Filipinos that we, too, could have had our monarchy from Spain. Perhaps a grandeur she was trying to replicate.

won diplomatic ties with it.

In 2006, a WikiLeaks document said protocol officers in the United States grit their teeth every time Imelda shows up because she arrives unannounced and starts making difficult demands.

For example, she asked to be received at the White House simply because she was in the United States. There was bickering over schedule, but a 45-minute tea break was arranged with then-First Lady Betty Ford.

Imelda showed up but was detained at the gate because security was not informed of the impromptu visit. Naturally, she was furious. When President Ford couldn’t drop by to greet her during the tea session, she became even more furious.

The two first ladies exchanged gifts. Disappointed by Betty Ford’s gift to her, Imelda left it behind, literally sputtering with rage, according to reporter Jack Anderson of ABC. Hence, “to insult Imelda was to insult the Filipinos.”

There is no one else like Imelda Romualdez Marcos

Whatever was said about the ‘Imeldific Imelda,’ the Filipino identity she reinvented continues to resound with beauty and pride—at least to her “loyal subjects.”

Even at 92 years old, people still gasped when ‘Queen Imelda’ entered a room. There is no one else like her in Philippine politics.