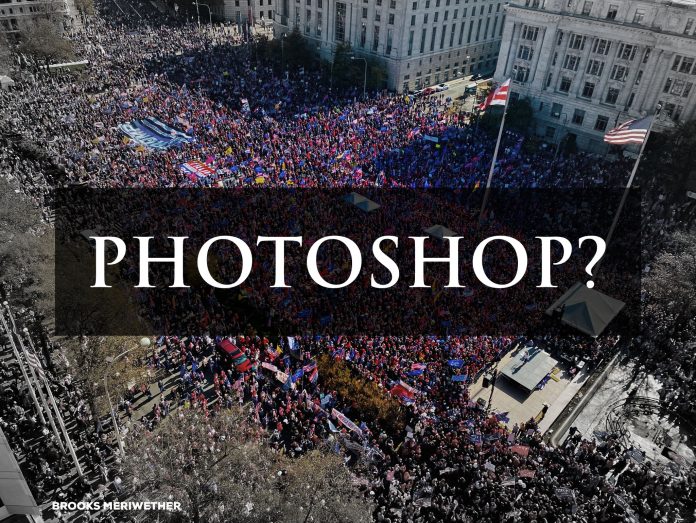 On November 14, 2020, the White House Press Secretary tweeted, “More than one MILLION marchers for President…” However, despite a massive crowd, a million is probably an exaggeration unless she’s referring to separate pro-Trump rallies in other places in the last few days.

Photos do not lie, or do they?

In contrast, Trump’s rally was massive. After the election, they took to the street in massive troves to support him, and his alleged voter’s fraud claim. But were they photoshopped?

Photo by Brooks Meriwether supported by a video by The Hill, but it doesn’t look like a million.

Mainstream media (MSM) has the Presidency sealed by calling Joe Biden as President-Elect. MSM debunks Trump’s claim of voter fraud. Before the election, massive troves of Trump supporters evident in all his rallies.

Many of Trump’s supporters refuse to accept his apparent defeat. Actor James Woods wanted to make a point and prove the President has more supporters than Biden. Hence, there is a warrant to claim voter fraud.

Contributor
Filam Tribune promotes Filipino arts, culture, and faith among Filipino Immigrants, Filipino-Americans, and Filams all around the world.

Pinay migrates from Taguig to USA with her dogs Tootie and Chimi via PAL Yes, your furry friend, family pet, or...
Read more

Trump's apparent win as 46th president by a landslide overestimated, as Biden leads by a narrow margin the next...
Read more

8 Filipino Classic and Neo-Classical paintings, a must in...
Read more

Trump's apparent win as 46th president by a landslide...
Read more
US News

The Judeo-Christian Roots and Bible Pararells of USA's Government...
Read more
US News

America and Israel in End-Time Prophecy

President Trump's "Mother of all peace treaties" in the...
Read more

Filam Tribune is a conservative Filipino-American news media magazine based in the USA. Our mission is to promote Filipino arts, culture, and values among Filipino and other Asian immigrants.