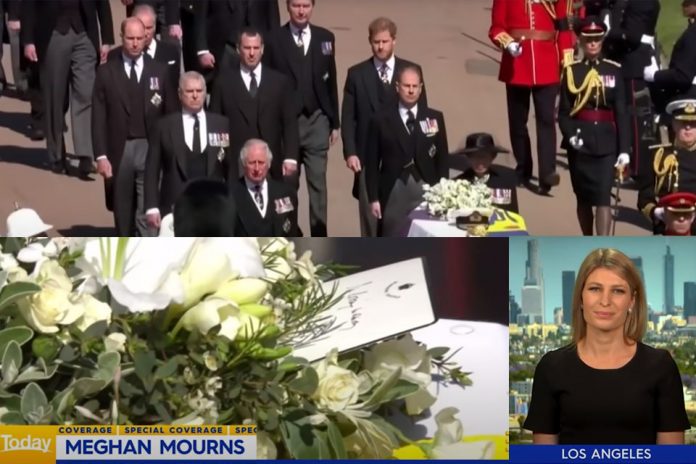 Australia’s News 9 reporter mistakenly said, wreath for Prince Philip done by florist, who did the “Flowers of Meghan and Harry’s funeral”

News Anchor of Today Show made a massive blunder. Reporting from Los Angeles, the 9 News Australia mistakenly said that the wreath for Prince Philip was done by a florist—who did the flowers of “Megan and Harry’s funeral.”

At around 1 minute of the video, the news reporter from Los Angeles said the following:

“It was done by her (Meghan’s) favorite florist Willow Crossley—who did the flowers for Megan and Harry’s funeral and also for Archie’s christening.”

The ‘wreath and note’ shown in TV was from the Queen, adding to the blunder

However, the real blunder was that News 9 showed the ‘wreath and note’ that came from Queen Elizabeth. The name “Lilibeth” was on it. It was not the wreath that Meghan sent, giving a false impression.

The reporter emphatically shares the story of Meghan’s wreath, which she dubbed “an olive branch of sorts.” She said:

In the entire clip, Today Show showed the ‘wreath and note’ that came from Prince Philip’s beloved wife, the Queen of England.

It was not the wreath that Meghan sent, giving a false impression.