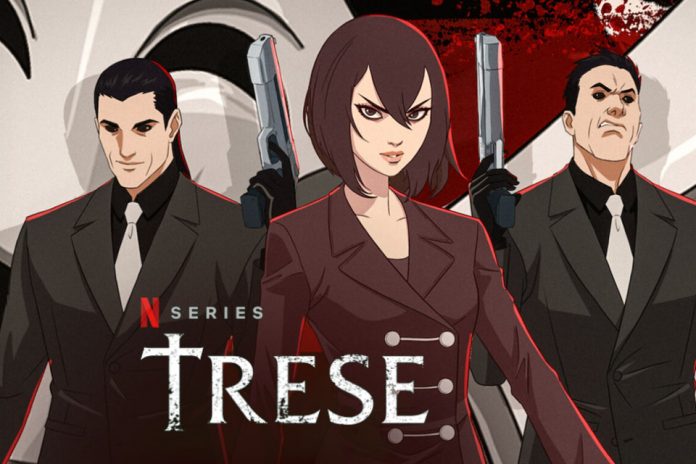 Few months after Disney’s Raya comes Netflix’s TRESE. But this time, it’s 100 percent Filipino and without a doubt.

Unlike Disney’s Raya, the cartoon series, TRESE, is horror. It is an adaptation of the award-winning Filipino horror comic of the same name, TRESE by Budjette Tan.

The gory animated series has an all-Filipino cast, dubbed in English and Tagalog. The cartoon movie was directed by a Filam executive director Jay Oliva.

Don’t get confused by the “suit and tie” ad fillers of TRESE. The world is set in modern-day Manila, Philippines. The animation opens in the cityscape of Manila at the LRT, where people were massacred by an unknown evil.

However, a huge storm brews, and evil and Satanic powers emerge. Most of these elementals were adapted from Filipino folklore.

Only Alexandra’s family can stop the evils of the underworld. As fate would have it, Alexendra inherits the skills and talents of a “Babaylan.” She grabs hold of the family’s heirloom, the Kris dagger, the only weapon that can stop the elementals. Equipped with the magic of the Babaylan, Trese is their only hope. She’s is the bridge between the supernatural and what the naked eye can see.

The anime film mentions several Tagalog words and phrases such as “Tabi-tabi po” (excuse me sir), which is a common phrase among Filipino. It’s uttered when walking along a road where elemental creatures from the ground could be roaming around.

TRESE (voice of Liza Soberano (Tagalog) and Shay Mitchell) is also a “Lakan.” It is a Filipino reference to a strong male, but used in the movie to refer to TRESE’s martial arts skills. Hence, a master in combat.