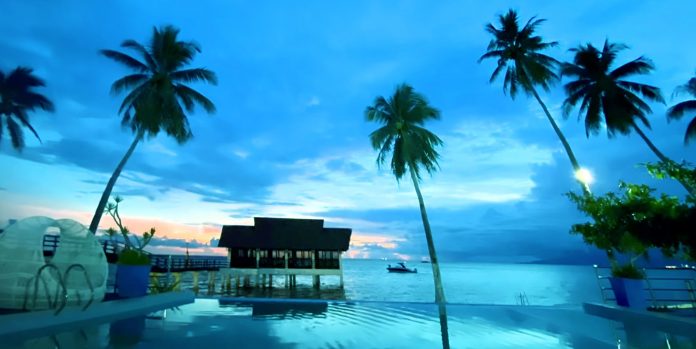 Boxing icon Manny Pacquiao’s wife Jingkee has become a celebrity herself in the Philippines. In her YouTube channel Jinkee Pacquiao—she gives the public a private beach tour of the family’s first private resort.

It stretches away from the commercial beaches of Gumasa. The minimalist private resort is luxurious with a blue and white theme with two main villas and the main house.

The exclusive family resort has its own “party pool,” overlooking the white sands of Gumasa Beach in Sarangani island

Vlogged by Jinkee herself, she begins the video with a disclaimer: “I’m not bragging for anything, na meron kaming ganito,” as she dons a summer dress. “Request niyo naman ito, so i-tour ko kayo,” (This is your request, so I will give you a tour).

Just a few weeks ago, Jinkee was criticized by celebrity Agot Isidro for posting the couple’s Hermès and Louis Vuitton bicycles. Isidro said it was rather “insensitive” posting such during this time of crisis.

However, many netizens took no offense and defended Jinkee. A lot took it as an inspiring expression of their “blessings” as they’ve blessed many others.

Our little slice of Paradise

The Pacquiao Family Beach Resort took shape in 2013. Jinkee calls it, “Our little slice of paradise.” The layout and design are simple but fit for a celebrity family. It has two villas—one for Jinkee’s side of the family, the Jamoras, and one for Manny’s relatives.

It’s a home, minimally designed. It has their family photos allover, and windows everywhere—of course! The main house overlooks the serene white sands of Glan in Sarangani Island.

A dream-resort for the Pacquiao family—well for most of us!

There’a boardwalk at the beachfront that leads to a function room. Well, it’s really a huge gazebo on concrete stilts; a few hundred meters from the beachfront. It was constructed both for family and friends.

However, most of the Pacquiao guests get entertained at the “bulwagan” (hall), in between the villas and outdoor pool.

It’s for Bible studies, although every corner of the resort is conducive for it

Jinkee wore a breezy summer dress as she walked on their private boardwalk towards the “floating gazebo.” In it, private parties held, but more importantly, Jingkee says it’s for Bible studies.

Where is Pacquiao’s beach resort?

The Pacquiao private family beach located in Taluya, Glan, Sarangani, in General Santos. It is where Manny hails. The family resort can be googled—distinctly away from the commercial beaches around Gumasa beach vicinity.

Of course, GenSan is home to fabulous beaches, while there, discover the unspoiled and beautiful attractions of Balut Island.

Among the popular beach destination in Gumasa are Kamari Resort and Hotel, White Haven Beach Resort, and Coco Beach Resort. The family’s resort is accessible via Sarangani National Highway.

Of course, the other “bigger” mansions of the Pacquiao family in Gensan is a modern resort-like home as well

Manny Pacquiao’s second home in General Santos City has a contemporary style. It is different from the first that has a Mediterranean theme. It was built earlier than the beach resort; in 2012 after Pacquiao’s fight with Timothy Bradley.

The best of Christmas in Paris 2022 Marveling at the...