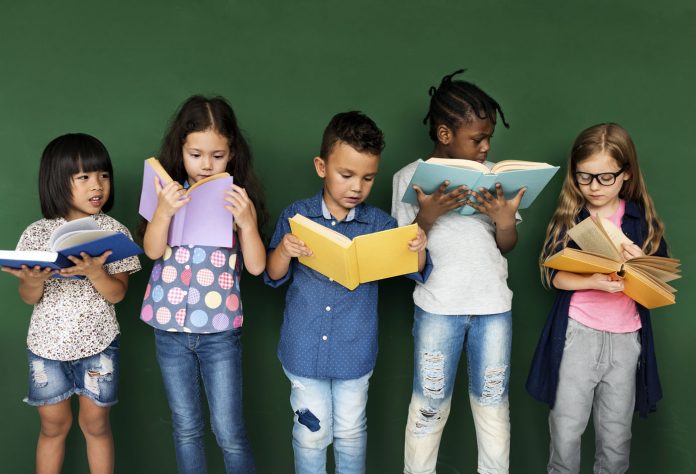 The book ‘Mellissa’ was previously titled “George.” It’s about a journey of a fourth-grade boy coming out as a trans girl. The book intends to encourage a boy struggling with his identity to embrace becoming a trans girl.

For example, “She immersed her body in the warm water and tried not to think about what was between her legs, but there it was, bobbing in front of her,” the book said.

“Melissa locked herself in a stall, delighted for the privacy. She lifted her skirt to see her underwear, covered in tiny red hearts. She pulled it down, sat, and peed, just like a girl…,” a “magnificent day for her.“

Award-winning author and illustrator of the book ‘Flamer,’ Mike Curato, is half-Filipino with an abusive father and depressed mother. Clearly, he had deep issues and suffered from depression.

He grew up being told that being gay is fundamentally evil, which is perhaps why the book is quite intense.

Flamer is about a gay relationship between a middle school and a high school at the camp. It contains “frank references” on gay sex, bullying, and self-harm—not suitable for a K-6 library.

Written by George M. Johnson, the book Boys Arent Blue is for young adults, an “honest memoir” about growing up a queer Black man in New Jersey and Virginia.

The book is about “educating” and encouraging LGBTQ people who face similar struggles and discrimination. However, there are descriptive consensual sex and sexual assault not suited for young readers.

In 2021, the Olathe school district in Kansas approved the book for grades eight and above—even if it contains graphic gay sex scenes. The community boasts a team that includes administrators, department chairpersons, teachers, and library specialists, who decide on reading materials.

Jill Woolbright of the Flagler County School Board in Florida filed a criminal complaint for allowing the “book memoir” on school library shelves. She said some chapters have explicit sexual details, inappropriate for young students.

For example, a monologue of a boy who masturbates to the imagination of him “hip-thrusting” while thinking of his latest gay exchange; a sister recommending her sibling put a finger in their vagina a “taste” it.

Gender Queer was the #1 most-challenged book in the country in 2021, according to the American Library Association. [Fox News]

In 2022, Oklahoma Education Secretary Ryan Walters (R) complained about this book, as well as the book ‘Flamer’ to the superintendent of Tulsa Public School. The superintendent told him to “knock it off.”

Authored by Becky Albertalli and Adam Silvera, the book ‘What if It’s Us’ is about two teenage boys having a gay relationship with explicitly homoerotic exchanges reserved for adult “gay smut.”

For example, “… slowly, his fingers trail closer to my boxers, slipping under their waistband… his hand slides down another inch. I don’t think I’ll ever not be hard again.” (p. 291)

“How does this specifically work? Who puts what parts where and in what order, and when does the condom go on, and what about lube? I know fucking nothing about lube.” (p. 292)

This book was first discovered in an 8th-grade English class at Thomas Jefferson Middle School.

The children’s Prince & Knight is considered the “first of kind gay book” intended to be a classic fairytale story for kindergarteners. It was initially discovered at Claremont Elementary School.

With colorful illustrations by Stevie Lewis, the book is intended for young readers. It is basically the alter ego of the traditional princess and prince story.

It also ends in “happy ever after,” with two adult men getting married.

Author Daniel Haack wants young kids to explore their sexuality. And if they identify as a gay boy, they find acceptance and eventual love with other boys.

Written by Ana Leblanc for very young kids, the book “Sex Education for 8-12-Year-Olds: Kids Book for Good Parents” was first published in 2017. It explains that it’s OK for children to see their parents having sex.

She suggested, “Couples can deliberately leave the bedroom door open or ajar while expressing intimacy.”

For the ultra-liberal author, a child should be gradually introduced to the mechanics of love-making and normalized. After all, it is uncommon for kids to see their parents “making love.” Kids should be able to “enter into the parent’s circle of love,” Leblanc said.

She said some of the most surreal things: “A mother should feel relaxed breast-feeding her baby while her husband makes love to her” (page 47).

The book ‘Juliet Takes a Breath'”‘ written by Gabby Rivera, shares the story of a girl’s journey coming out as a lesbian.

The book ‘Beyond Magenta,’ written by Susan Kuklin, documented stories of LGBTQ+ youth. It aims to encourage those who struggled or were bullied over their sexual preference.

However, specific passages are disturbing for young readers that encourage them to think that the homosexual lifestyle is something to be embraced at an early age.

Passages include an 8-year-old having gay sex. “From six and up, I used to kiss other guys in my neighborhood, make out with them, and perform oral sex on them. I liked it. I used to love oral. And I touched their you-know-whats… Guys used to hit on me – perverts – pedophiles.”

THE WAR AGAINST CHILDREN.

The book Milk and Honey by Rupi Kaur is a #1 New York Times bestseller. It is a collection of poetry and prose about survival—the experience of violence, abuse, love, loss, and femininity.

It was inspired by a poem Rupi wrote in 2012, where she used ‘milk and honey’ as a metaphor to describe the strength and resilience of Sikh widows who survived the Sikh genocide of 1984.

For example, one of the pages depicts a naked woman’s legs spread open with a poem in the center. “You have been taught that your legs are a pit stop for men that need a place to rest, a vacant body empty enough for guests, but no one ever comes and is willing to stay,” it says.

‘This Book is Gay‘ by Juno Dawson is like an “instruction manual” exploring what it’s like to grow up LGBTQ. As young as 14 have access to it in Dearborn district, Ferry Elementary and Grand Haven High School Library Michigan, and other schools across the nation. [Restore Ottawa]

The book explicitly promotes the “homosexual lifestyle” by teaching readers how to use gay and sex apps, how to have (oral) sex, and how to meet up with an adult (Page 107).

While gay adults would enjoy reading the book, it is age-inappropriate.

DIGITAL BOOK BURNING, THE BIBLE IS NEXT.