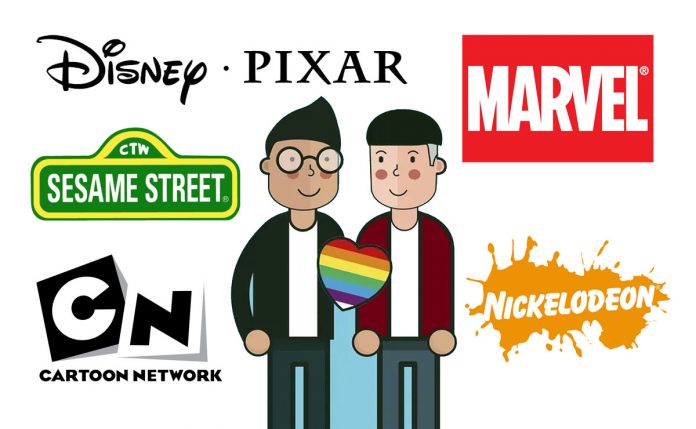 History of LGBTQ in American cartoons

LGBTQ characters in movies have been around since the 1950s, but “gay toon” was taboo until 1967 when the age of Aquarius when the sexual revolution was at its height.

In the same decade, the “hippie age” peaked and “mandated free sex,” lack of inhibition, especially in nudity, and open drug sessions. During this time, gay cartoon characters were being developed.

After the sexual revolution peaked, a total of about 42 gay, trans, and queer characters were presented from 1967 to 1999.

A massive jump at the dawn of the internet

When the internet and smartphone tablets became readily available, LGBTQ cartoon characters jumped to 300 from 2000 to 2019. [List of gay animations]

In 2010, Cartoon Network’s ‘Adventure Time‘ is attributed to the “animation golden age” when a plethora of diverse cartoons peaked. In 2018, Adventure Time’s 10th season confirmed the gay relationship between its two main characters: Princess Bubblegum and Marceline.

Another LGBTQ milestone was when two male characters, Arthur and Mr. Ratburn, married in 2019. It was significant because an actual marriage was depicted for young kids to watch this time.

2021, a big year for LGBTQ cartoons under the Biden administration

Sesame Streets’ Gonzorella: Even the muppets are transitioning

The “Muppet Babies” reintroduced the beloved character Gonzo as a transgender princess. He dubbed himself “Gonzorella.”

“Blue’s Clues & You,” a Nick Jr. cartoon for young children, featured an LGBTQ pride parade with non-binary animals and a cartoon drag queen Nina West who introduced the gay alphabet.

In 2021, the man of steel, hero of other heroes and heroin, was introduced as a gay, bisexual character. DC Comics brought in Jay as the boyfriend of Super Boy Jonathan Kent, the son of Clark Kent.

In the same year, Nickelodeon pushed hard to promote LGBTQ by introducing Drag Queen Nina West, a trans who sang the “gay alphabet” and the PRIDE song to young children.

Nickelodeon and Nick Jr.’s ratings plunged after championing the “trans,” “queer,” and “pansexual” bandwagon of America.

LGBTQ’S WAR AGAINST THE NUCLEAR FAMILY.

In 2022, Disneyland banned using “boys and girls” and “ladies and gentlemen” to greet guests in its theme park. The woke company wanted to accommodate “non-conforming binaries.”

In 2022, Disney’s Pixar introduced its first “gay kiss” in the cartoon movie ‘Lightyear.’ However, the film flopped on opening weekend after facing backlash. Disney also replaced conservative star Tim Allen with Chris Evans as the voice of Buzz Lightyear.

The same year, Big Hero 6’s Baymax grocery scene shows him asking people what feminine hygiene is. Conservative commentator Michael Knowles describes it as a “dude with a tampon wearing a transgender flag shirt” who tells Baymax that it is what he or she uses.

“It is an artwork that is being intentionally peddled to really young kids… actively pushing (the gay agenda) to kids,” he said.

LGBTQ MILESTONE IN THE USA.