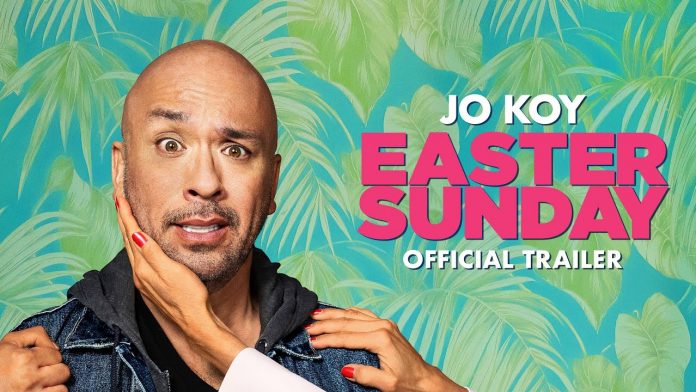 Jo Koy’s ‘Easter Sunday’ film may be a comedy, but it reminds Pinoys of what should matter most

Easter Sunday is a 2022 comedy film starring stand-up comedian Jo Koy (Joseph Glenn Herbert). Written by Filams Ken Cheng and Kate Angelo, the story revolves around what being Filipino is all about and the quirks that go with it. The movie centers on Jo Koy as a struggling actor, comedian, and single father.

The film’s highlight was when Joseph (Jo Koy) attends his loud and dysfunctional “Filam family” on Easter Sunday for a gathering.

There was also a debate over the pasalubong and petty quarreling between the two aunties. The funniest was the ‘Balikbayan Box‘ scene which bares the idiosyncratic Pinoys.

Easter Sunday broke ground as the first all-Filipino-American cast filmed and produced in the USA. The story may not be as glamorous as the Rich Crazy Asians, but it is something Filams can be proud of—including quirks.

The movie was expected to gross $5–7 million from 3,175 theaters. It debuted at $6 million and grossed $13 million worldwide. It finished seventh at the box office, which was not bad.

Interestingly, the rom-com movie ‘Bros’ that opened the same weekend flopped with only $4.8 million. It had a $22 million budget with $30 million on marketing.

HISTORY OF FILIPINOS IMMIGRANTS IN THE USA.

Although the movie is not about religion, the Christian tradition featured in the film is embedded in the conservative culture of Filipinos, at least for most Filipinos. Hence, Easter for Jo Koy holds an immediate value.

On Easter Sunday, the family was preparing dinner, and chaos ensued. Jo gives a speech about family and brings everyone together to karaoke as the dinner grows tenser.

It changed the mood, and bickering was set aside. After all, what matters most is family, united in God’s love.

The film had mixed reviews where polled audiences by CinemaScore gave it an average grade of “B+.” PostTrak gave it a 71%, with 49% saying they would recommend it. Of course, the respondents were also mixed race.

On Social Media, Pinoy’s “Talangka mentality” (crab mentality) was criticized, with some saying it was corny. At the same time, some claimed Easter Sunday was not the most important holiday in the country.

Jo Koy’s claim on Easter Sunday is true to history

Before the dawn of the internet, the Easter fiesta has been a huge celebration since the mid-17th century. It coincided with local fiestas that honored the beloved saints and Jesus on resurrection day.

The Salubong (meeting) is when Jesus and His mother, Mary, met after His Resurrection. A day-long feasting and community celebration follow it.

Major Holidays and Festivals in Asia

Major Holidays and Festivals in Asia, Celebrated in the...
Events and Entertainment

Filipino Festivals and Holidays in the USA

Special Holidays and Festival for Filipinos living in the...