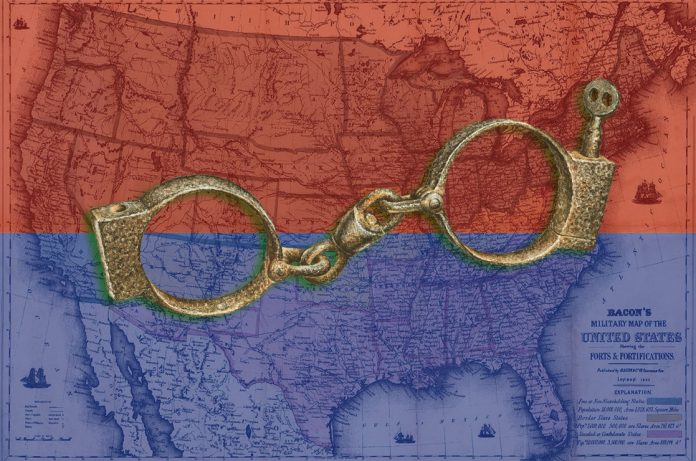 History of how the Republican and Democrat parties developed during the Confederation, Confederacy, Civil war, and Abolition periods formed

The Confederation Period (different from Confederacy) officially began in 1781 when the Article of Confederation was ratified. It did not include a president. In 1788, a new Constitution took effect and a new form of government—Federalism.

A federalist system created a strong central government with three equal branches. However, not everyone preferred a government with so much power—reminiscent of British rule. Hence they were called anti-Federalists.

Two parties developed during the term of the first POTUS, George Washington. The critical issue was the power and size of the federal government. They were known as “Federalists and Anti-Federalists.” [The Americans, Littell, p186]

The second split of political parties that developed almost a century later was based on the issue of Black slavery.

Although the “great compromise” during the 1787 convention satisfied both sides, the issue of “big and small government” will divide the nation during President’s Biden term because of the vaccine mandate. [NY Times]

Thomas Jefferson helped develop American federalism, although he was an anti-federalist. He favored a strict interpretation of the Constitution yet expanded his executive power by asserting “implied power” to justify the Louisiana Purchase. [Manifest Destiny]

Although Americans were free from British tyranny, Blacks remained slave laborers. The northern states had local and European immigrant workers while the south had enslaved Black people.

Both sides benefited from Black slavery. But when the book Uncle Tom’s Cabin was published, it became clear that the end did not justify the means.

2. Kansas-Nebraska Act: A defining moment for the future Democrat and Republican parties

In 1820, the Missouri Compromise prohibited slavery above the Missouri line (northern states). But in 1854, Democrat Senator Douglas authored the Kansas-Nebraska Act. It split the territory into antislavery and pro-slavery states.

As a result, a great debate ensued among politicians. It caused the “Bleeding of Kansas,” or the “Border War,” a violent civil confrontation in the territories.

Those who refused to overturn the compromise (against slavery) became the Republican party, with Abraham Lincoln as its prominent figure.

The merge and dissolution of political parties

The opposition to the Kansas-Nebraska act splintered the Democratic Party. The Whigs party dissolved. Northern Whigs and antislavery Democrats merged as the Republican Party. Democrats survived as the only national party. [History]

Today, many assume that the Democrats were “antislavery.” While Republicans were “pro-slavery,” the opposite is true. However, USA Today’s fact check asserts that the party split was for geographical reasons than partisan.

CONSERVATIVE AND LIBERAL PARTIES OF THE PHILIPPINES.

3. Confederate South vs. the Union North

The Confederate State of America or Confederacy (Pro-Slaves)

Abraham Lincoln (Republican) was the 16th POTUS. His name was removed from the ballots of some southern states. Still, he won the election by electoral votes.

Lincoln’s platform centered on antislavery, but he couldn’t enforce his plans all at once. First, he had to score a victory against the south (Civil war; Battle at Antietam, 1862). As “spoils of war,” he was able to demand to free the enslaved people, initially from the rebellious, defeated states.

In President Lincoln’s inaugural address, he pledged not to interfere with slavery from non-rebellious states. Two years after, Lincoln issued the Emancipation Proclamation in 1863. The first African-American members of congress were 23 Black Republicans. [Gov. Info]

On April 14, 1865, John Wilkes Booth, a Confederate sympathizer, shot the president after hearing Lincoln promote Black voting rights. “That means nigger citizenship… the last speech he will ever give,” Booth wrote in his diary.

Blacks may have been “freedmen,” but persecution followed with KKK, a white supremacist group that used God’s name to justify their evil.

Scalawags and carpetbaggers, who supported the Republican party, took advantage of the reconstruction and political instability of the postwar South. These whites used freedmen to justify their (corrupt) plans.

Despite the emancipation, Black segregation was yet to follow. By the late 1960s, the national Democratic Party abandoned its former support for “legal segregation.”

In 2018, G. Washington High School in California removed two George Washington murals because a group said it was offensive. By 2021, the San Francisco school board attempted to remove the names of Washington, and Lincoln, among others, from its 44 public schools.

A Missouri Democrat Rep. suggested the Lincoln Memorial statue should come down in the same year. In 2020, Lincoln’s statue (Freedman’s Memorial) was removed.

The two-party system of the USA is also known as Conservative-Republicans and Liberal-Democrats today or the “Right and Left.” A “divided north and south” is history, but today’s political divide is replaced by social justice, gender equality, Luciferian ideology, and other moral issues: