How Imelda Marcos brought Filipinos to the world 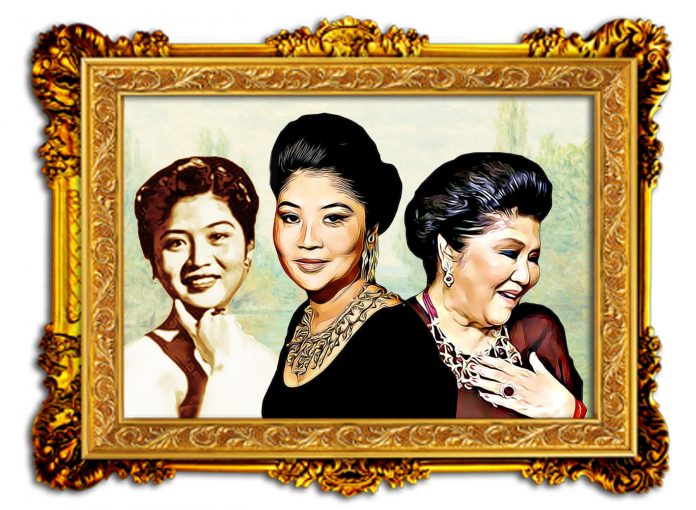 Imelda Marcos is mostly criticized for how she set the standard for art and culture. Although she boarded up the streets of the metro to cover poverty, she addressed a myriad of issues for the poor while she modeled beauty and flaunted her diamonds.

In her interview with CBC Canada in 1983, Imelda justified her extravagance by saying, “As First Lady, I have to flaunt love and beauty… which is some kind of frivolity and extravagance… when there’s so much deprivation. And yet it is basic for survival of a human being—beauty and love.”

Imeldific: Setting the standard of art and beauty for Filipinos

Despite the frivolities, Imelda’s pizazz reflected what some, if not more Pinoys, would have wanted: To elevate and create a unique Filipino culture and identity through arts and fashion.

It may not have fed their stomach, but it did provide, in a sense, that things would be better in the future—she just needed to put on that show, and the rest will follow.

Imelda put the Philippines into the world’s center stage—at least in perception, which is an accomplishment by itself.

Put on that show and the rest will follow.

1. The Order of National Artist of the Philippines

Imelda Marcos is the quintessential advocate of Philippine arts and culture. She was the patron of the country’s highly acclaimed national artist Botong Francisco, among many others.

On April 27, 1972, President Marcos Sr. issued Proclamation 1001, creating the ‘Order of National Artist of the Philippines.’

Marcos’ decree paved the way for the recognition of Amorsolo, Botong Francisco, Abueva, Edades, and Manansala, among others, during the Marcos era.

2. Imelda’s Culture: Art, music, drama, and dance for the masses

Imelda brought to the country one of the most celebrated pianists in the world, Van Cliburn. She inspired our conservatoires to raise talents of our own by patronizing classical music for the masses.

Imelda herself was on top of cultural events that launched world-class pianist Cecil Licad to the world center stage. Licad later said she credits her success to Mrs. Marcos.

After CCP, there was the Folk Art center (Tanghalang Francisco Balagtas theater) in 1978. It was the venue for the Filipino masses to appreciate folk arts. The Filipino talent through festivals of music, dance, drama, and films was celebrated in this public theater.

During the 50th anniversary of the CCP in 2020, the board of trustees honored Imelda for shaping the arts and culture of the country. She was the founding chair of the CCP, created under E.O. No. 60 by President Ferdinand Marcos Sr.

The Maria Clara gown or two-piece terno was the fashion standard before the one-piece version became popular in the 1940s. Terno was not introduced by Imelda but by National Artist Ramon Valera.

With fashion czar Pitoy Moreno, Imelda and her coterie of “Blue Ladies” modeled the terno using jusi and piña. Moreno’s contribution to the history of Philippine fashion culture is unparalleled, and he owes it to Mrs. Marcos. [Metro]

Augie Cordero calls it the “golden years of Philippine fashion with Imelda, setting the standard. “Nobody would set foot in the CCP in denim.” But under Cory Aquino, Cordero felt she could not be bothered about the arts, he said.

Dressing for the masses

Imelda Marcos dressed for the masses. She was quoted as saying they expected it of her. Cordero noted that she mingled with and hugged the poor and expressly forbade her Blue Ladies from carrying hand sanitizer.

In 1976, the “Chamber,” precursor of the Philippine Chamber of Commerce and Industry, proposed the “First Philippines International Trade Fair,” inspired by the Canton Trade Fair. The problem, the country did not have a trade hall.

As chairwoman, Imelda had Philcite built in six months. In such a short period, they got 20 countries out of 70 embassies in Manila to join the trade fair, including the US, Japan, China, and Russia. [Bernie Cahiles-Magkilat]

Empowering the youth, the future of the country

Marcos also looked heavily into raw material exports to Europe and improved labor policies for the OFW by establishing the National Manpower Youth Council (NMYC) in 1975, which paved the way for TESDA.

The same year, “A la découverte des Philippines” was an exhibition of Philippine products at Parly, France, among other trade shows she actively pursued locally and abroad. [AP Archive Video]

BONGBONG MARCOS: THE RISE OF PHOENIX OR THE AQUINO’S KARMA?

The Iron Butterfly: It wasn’t all about beauty; there was also guts

Elegant and soft-spoken, the “Iron Butterfly” made things done. To get what she wants, she breaks protocol.

For example, Imelda invited herself to critical political events in the United States. She often came unannounced and asked an audience in the White House. Protocol officers called her a “pest” and “gate crasher.”

She was able to rub elbows with Mao Ze Dong, Prince Charles, Muammar Khadafi, and Pope John Paul, among others, that very few first ladies had an opportunity.

In 1976, President Marcos sent Imelda to Libya several times to charm Muammar Khaddafi to terminate aid and support for the communist rebels in the Philippines. It resulted in the Tripoli Agreement.