History of Filipino Immigrants in the USA 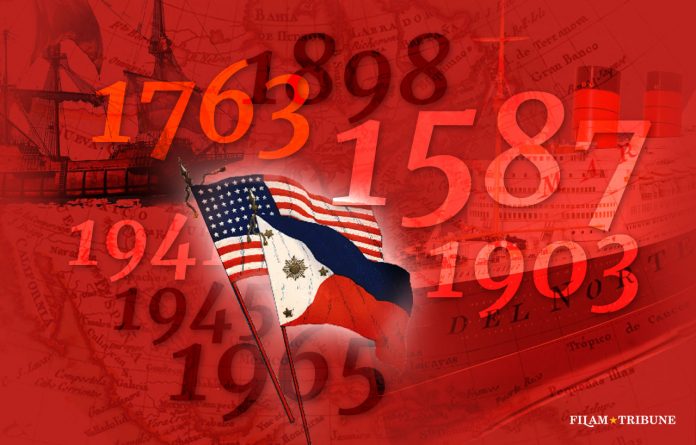 Asians are part of America’s fabric: The first Filipinos landed in California in 1587; Filipino settlers in Louisiana in the 1700s. Despite Filipino roots in the USA, we still get our share of discrimination and lesser privileges.

In 2021, Asian Americans remained the highest contributor to USA household income, most educated, and top in SAT scores. Filipinos were third in ranking for the highest average monthly payment.

Ellis Island became the busiest immigration processing zone. From 1892 to 1924, about 12 million immigrants arrived at the Port of New York and New Jersey. Earlier in the 1860s, Chinese immigrants provided much labor to build railroads across America.

In 1915, many Japanese immigrants coming through Angel Island in San Francisco outnumbered the Chinese. At the same time, Filipinos (along with Blacks and Europeans) worked as farmworkers (Sakadas) trickled in California, but mainly on Hawaii plantations.

First Landing of Filipinos in America

The first documented Filipino in America landed at Morro Bay in Upper California on October 18, 1587. Filipinos (Luzones Indios) were employed as seafarers for the Manila Galleon Trade, the Nuestra Señora de Buena Esperanza.

The Manila Galleon traded from Manila to Acapulco lasted for 250 years. An estimated 500 trips gave the Luzones Indios (Filipino natives of Luzon) opportunities to jump off the ship and settle in the Americas.

In 1585, Pedro de Unamuno led the voyage from Manila to Acapulco and his discovery of California. Details of his journey revealed the Filipino landing in Morro Bay.

In 1929, his accounts were translated for the first time in English and published in Henry Wagner’s Spanish Voyages.

First Filipinos in America landed in Upper California in 1587.

The Philippines was a model colony of Spain. “Spanish Texas” was part of several “New Spain” the Spanish empire wanted to colonize. Spain claimed ownership of Texas in 1519. [Davidson; Nuevas Filipinas]

Early settlers in the swamp of St. Malo, Louisiana, in the 1700s were Filipinos. A group of Filipino sailors jumped from a boat that was unloading cargo in the bay area. They fled towards a cypress swamp.

The Filipino sailors were aboard the Spanish Galleon trading in New Orleans.

They eventually settled in the marshland of St. Malo. Harper’s magazine first published the first documented Filipino settlement of “Manila men” in 1883.

Early settlers in the swamp of St. Malo were Filipinos in 1700.

In 1781, Filipino Antonio Miranda Rodriguez, with eleven pobladores, was tasked formally to settle in the area. Los Angeles, like Texas, was to be part of the “Nuevas Filipinas” as Spain attempted to colonize western America.

Los Angeles like Texas was to be part of the Nuevas Filipinas.

Low-income Filipino laborers or Sakadas were recruited to work on farms in the United States. They worked alongside African-Americans.

The Sakadas were concentrated in Hawaii and the canneries of Alaska, to which Filipinos referred to them as “Alasakeros.”

Between 1906-1946, over 100,000 Filipino men were recruited by the Hawaiian Sugar Planters’ Association to work as Sakadas for Hawaii’s booming sugar plantation industry.

The final wave of immigrants was in 1946. By 1932, Filipinos were the backbone of plantation labor, making up 70% of the plantation workforce. [Sakada Series]

Filipinos were the backbone of plantation labor in Hawaii.

The Philippines became an American territory in 1902

The U.S. technically acquired the Philippines after defeating Spain in 1898. Filipinos fought the U.S. for its independence but lost and became a U.S. territory in 1902.

As a result, Filipinos were allowed to immigrate to the U.S. without restrictions, even after the quota law of 1924 went into effect.

Filipinos came in ships and landed in the ports of Hawaii and San Francisco. As expected, they, like the Chinese and Japanese, suffered discrimination.

For example, Angeles Monrayo, who lived in Stockton, California, said police patrolled the streets at night to keep Filipinos from entering the white neighborhoods. There were hotels with signs that read, “Positively no Filipinos allowed.”

The United States Congress passed the Pensionado Act, which established scholarship programs for Filipino students. The move somewhat healed the relationship between the two countries after the Philippine–American War.

Initially, they were from wealthy elite Filipino families to study in Ivy League schools

The scholarship also aimed to prepare the Philippines for self-governance

Initially, they were selected from wealthy elite Filipino families to study in Ivy League schools in New York, Massachusetts, and California.

Later, less fortunate but bright young Filipinos were admitted, and the Philippine government funded these pensionados. Eventually, it became partial while others completed their education at their own expense. [Annual Report, 1930]

From 100 pensionados, it increased to about 14,000 by 1938. Most of the students returned and assumed government positions in the Philippines.

Senators like Defensor and Angara introduced bills named after the Pensionado Act in 2010, 2017, and 2019.

HOW POLITICAL PARTIES FORMED IN THE PHILIPPINES.

This allowed the Philippines to be independent of the United States. It also allowed for a limited immigrant quota of 50 people. However, it was offset by the U.S. Navy’s recruitment that began in 1898. These Filipinos were exempt from this quota.[Filipino Settlement]

In the 1930s, 25,000 Filipino Americans in the United States Navy were primarily rated as stewards.

Americans recruited Filipino soldiers to help fight WW2. In exchange, they were promised citizenship as well as pensions. Thousands of Filipinos responded, serving in the first and second infantries.

Although the U.S. government said they would receive U.S. citizenship and veterans benefits, lawmakers later stripped Filipino WWII vets of those benefits.

The Filipinos were the only group denied full U.S. veteran status among soldiers from more than 60 other countries who served with the U.S. They fought for what was promised. In 1994, Filipino veterans of WWII were finally granted U.S. citizenship. [PRI]

Filipinos and others came to the USA as part of an exchange program for international study. Many of them were registered nurses in the Philippines. They were also allowed to become American citizens.

The annual immigration quota for Filipinos was only 100. By 1952, the McCarran-Walter Act temporarily allowed for a quota for about 2 million immigrants. About 236,000 Asians immigrated by 1965. [L.B. Osborne, p92)

The McCarran-Walter Act upheld the quota system of the Immigration Act of 1924. However, it also ended Asian exclusion from immigrating and created a system of preferential treatment based on skills and family reunification.

As a result, relatives of Filipinos were able to “petition” their children and parents to come to live with them in the USA.

The Act removed the racially discriminatory “National Origins Quota System.” As a result, it increased immigration dramatically from immigrants in other countries. The 1965 Act remains today. It allows 20,000 immigrants to enter the USA each year.

In June 2020, immigration to the USA was put on hold for the first time since 1965 by former President Trump.

The Fourth Wave of Filipino Immigrants

As a result of the Immigration Act of 1965, Filipino professionals like doctors, nurses, engineers, and military personnel moved to the USA. It triggered the Filipino diaspora dubbed “brain drain” during the Marcos era.

Today, 1 out of every 20 people is Asian. The 2020 census indicates at least 4 million Filipino immigrants and American-born Filipinos living in the country. Pinoys are the fourth-largest group of immigrants in the USA. [Immigration policy]

FILIPINO POPULATION IN THE USA.

Jo Koy's 'Easter Sunday' film may be a comedy, but it reminds Pinoys what should matter most Easter Sunday is...

Seven photos of TWA hotel that bring you back in time at the John F. Kennedy International Airport Trans World...

Seven photos of TWA hotel that bring you back...

The rise of Filipino Chinese in building the economy...

Genetic ancestry of Filipino people are closest to the...
- Advertisement -