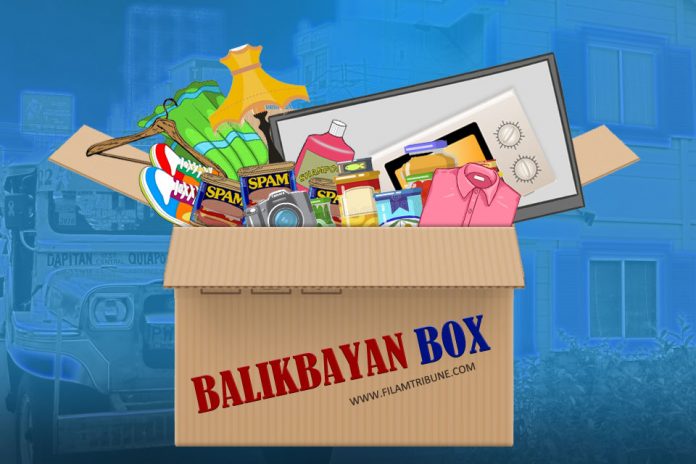 Janet Santos remembers counting the days until the truck carrying the much-coveted “balikbayan box” from her aunt in Chicago arrived at her doorsteps in Laguna. Her aunt would usually send these boxes to come just in time for the holidays, enough to give some Christmas cheer to everyone.

These would be packed with gifts: milk chocolates, corned beef, sausages, soaps, towels, and Vienna sausages. Those days, they were called “stateside.” Others called them “P.X. goods.” Now, Pinoys call them “imported.”

What is in the Balikbayan Box?

Diana, a schoolteacher in Manila, immigrated to the U.S. in 1987. Her generation lived for P.X. Goods and U.S. brands in Cartimar. Back then, “blue seal” was the real deal for her husband. She is on her 60th Balikbayan box now – she sends it twice a year to the Philippines. What is in it?

Initially, they were shampoos, perfumes, Hanes, and of course, spam. Today, it is inanities, ukay-ukay actually. They are used stuff, signature hand-me-downs to give away to her less fortunate neighborhood back home.

There’s pride in every box

Overseas Filipino Workers joke that this is the best way to come home, not in a box. The balikbayan box has long been the symbol of the Filipino’s longing for a better life. For the senders, it means they have made it.

To the recipients, these boxes are a much-needed blessing, a free taster of a good life they can only dream of. “It is one of the things that are a part of us,” says Rachel Cerdenio-Howell, a Fil-AM professor of English at East Los Angeles College.

“We hope to instill it in our children’s generation too.”

During the 1970s, high unemployment rates forced thousands of Filipinos to look for work outside the country; they had to travel long distances and be away from their families to survive. The best way for them to stay in touch was by sending balikbayan boxes.

OFW families looked forward to it on Christmas

Overseas Filipino Workers, mostly from the Middle East and H.K., sent boxes towards Christmas. In the late 1990s, freight prices in the USA became competitive. As a result, Filipino-Americans began sending boxes the whole-year round.

The politics of Balikbayan boxes

Under the Cory Aquino administration, the government officially waived the taxes and duties on balikbayan boxes. At around this time, entrepreneurs like Rico Nunga started to offer these boxes door-to-door delivery for $40 to $80. Many other companies quickly sprouted.

In 2015, Philippine Customs said it would subject each box to inspection and additional taxes. It drew flak from netizens. Fortunately, it gave way to the Customs Modernization Act, which included the Balikbayan Box Law tax-exemption ceiling.

Today, the lowly balikbayan box is a highly-priced industry in itself. There are now over 7 million balikbayan boxes sent to the Philippines annually. Companies like Forex Cargo send around 1,200 boxes every month.

Consequently, many more people found stable jobs, thanks to the humble balikbayan box.

With that being said, it is more than just what is inside the boxes that excite Pinoys back home; it is the love they feel each time a relative sends over a box. As the adage goes, it is the thought that counts.

Today, sending a Balikbayan box costs $70 and takes 2-3 months to reach Manila, regardless of weight. In this day and age, when travel is faster, snail-paced delivery still has not deterred Filipinos in America from sending their version of care packages. It is thriving.