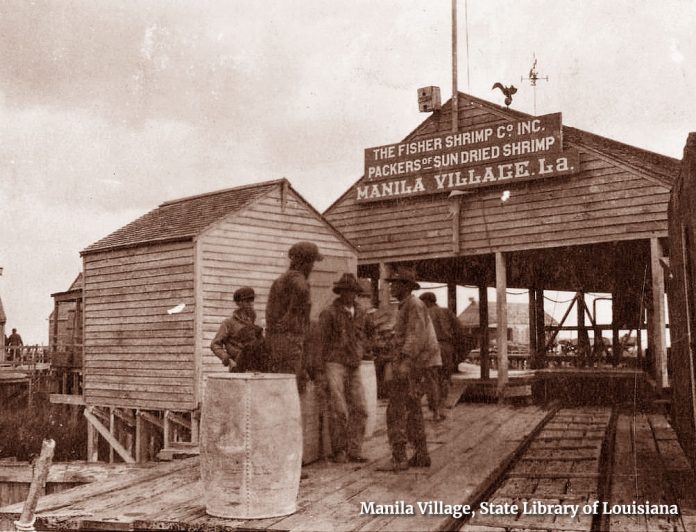 Early Filipino immigrants in New Orleans, known as “Tagalas” and “Manilamen” contributing to the fabric of America

Since the first landing of Filipinos in 1587, the Manila Galleon trade traveled once or twice a year from Manila to Acapulco. After hundreds of trading trips in North and South America, occasionally, Filipinos “escaped” their brutal condition in the ship to settle in America.

First report of Filipinos in Louisiana, 1763

The settlements of St. Malo were occupied by Filipino sailors who jumped ship the Spanish Galleons docked near New Orleans.

A boat was reportedly unloading cargo when a group of Filipino sailors fled toward a cypress swamp. The Spaniards did not pursue the Filipinos for fear of being eaten by alligators. [M. Espina; Asian Americans.]

In 1763, the “Manila Men” and their 50-year-old village in St. Malo were described in detail by noted journalist Lafcadio Hearn. He traced eight generations of descendants from these Manila Men. It means that early Filipino settlers would have landed in the area as early as the 1600s.

The first documented Filipino settlement of “Manilamen” was in 1883 at the marshlands of Louisiana. A hundred years earlier, Juan San Maló led a group of fugitive slaves (Maroons) in New Orleans in 1784. The Spanish government attempted to capture the group.

They retreated in the marshland surrounding Lake Borgne, Louisiana. Malo was eventually captured and hanged. Refugees left in the area became known by his name.

It wasn’t until 1883 that Harper’s Weekly documented the community firsthand and featured a Filipino Community who were called “Tagalas.” The illustration showed The Lacustrine Village of Saint Malo where the Filipino houses were in stilts, reminiscent of the traditional “Bahay Kubo,” on the marshes.

Saint Malo was a small fishing village that existed along the shore of Lake Borgne in St. Bernard Parish, Louisiana, in the mid-1800s. The 1915 New Orleans hurricane destroyed it. [Filipiniola]

Harper Magazine described it as a community of over 150 fishermen, the Manilamen in the Louisiana Bayou. A stilted village, it’s a perfect location for the prosperous shrimping and fishing business of Pinoy immigrants at that time.

In a way, the Filipinos helped established shrimp farming in that area because it was a dying livelihood at that time.

The Manilamen defending New Orleans in 1812

Filipino-Americans living in the area called “Manilamen” were recruited to serve under the American forces to defend New Orleans from the British army. [Marina Espina]

A bigger Filipino community in South of New Orleans

A larger Filipino fishing community was in the south of New Orleans at that time. The Manila Village, founded in the 1880s, was at the back of Barataria Bay, 15 miles north of Grand Isle. In the 1890s, about 300 Filipino and Mexican shrimpers occupied the village.

Despite widespread intermarriage, many Louisianans of Filipino heritage have maintained strong ties to the Philippines, their language, and their culture.

A marker was placed in 2012 at St. Bernard Parish to commemorate the Manila Village. In 2019, a second historical marker was placed by the Philippine-Louisiana Historical Society (PLHS), located in front of the courthouse in the Town of Jean Lafitte.

These markers are a testament to how early Filipino immigrant settlers became part of the American fabric. Today, Louisiana is the nation’s top shrimp producer with an annual income of $1.3 Billion.