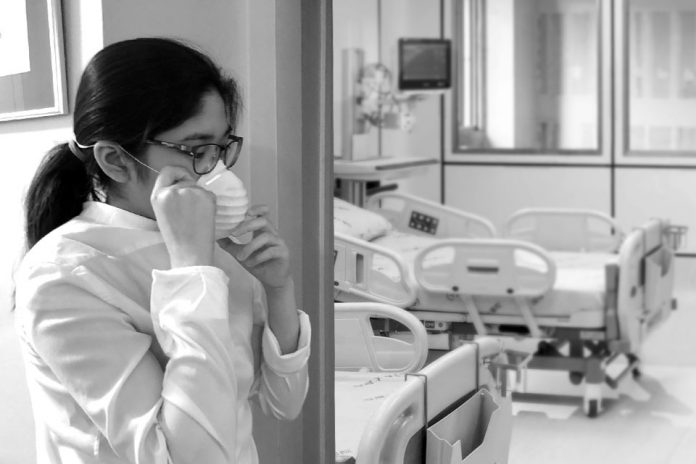 Gigi Narisma Estabillo reports for work diligently, despite the threat of COVID-19. Like most Filipinos, Gigi is not fussy, but she has to reuse her N95 mask in an American hospital. “It’s frustrating with the lack of supplies,” she said in an interview with CBS8.

Estabillo’s team forced to care for the increasing number of patients, risking them from exposure to the virus. They begged for more PPE and testing kits. Half of the staff at her hospital are mostly Filipino nurses.

It’s frustrating with the lack of supplies

→ Wanted: Filipino nurse, is it still worth the risk?

Alfredo was 68 years old with a heart condition. At risk, he was asked to move a COVID-19 patient when younger ones were available to do so. His wife Susana also worked as an assistant nurse in a care facility. She often pulled double shifts to save money. [ProPublica]

At 64 years old and with diabetes, Susana was at risk as well. The nursing home did not provide adequate PPE. She had to be resourceful. Alfredo first got sick, then Susana. They both died four days apart. Would it have been avoided if they were treated differently?

→ Filam front Liners in the eye of the pandemic.

Discrimination in the workplace?

America should step up in protecting its health workers. “We think America is great, yet everything that has happened, the fault is from top to bottom. Nothing is working. And we are scared,” said Narisma-Estabillo in an interview with LA Times. “They are pushing us to die,” she added.

They are pushing us to die

What’s funny about being a nurse?

Filipino Nurse and weekend chef Justine Foronda takes the nursing profession to be something of an inside joke. “We get put into this box, like, oh, it’s funny that all the Filipinos are nurses,” he said in the same interview.

Since the pandemic, the medical labor force had to double if not triple their work. It’s usually the nurses who bear the brunt; they had to attend to patients frequently. The pandemic is taking an outsize toll on them.

The US built a pipeline that draws nurses from the Philippines every time it faces a shortage. Although Pinoy nurses in the US remain emotionally strong and proactive, words of appreciation is not enough to protect them.

Pray for our health workers around the world

Pinoy nurses fill the rank in other countries too. In the UK, the Philippine embassy confirmed to Al Jazeera 56 Filipinos died due to COVID-19 end of April, including citizens, immigrants, and Filipinos by ethnicity.

An estimated 4% or about 150,000 nurses in the USA are Pinoy. In some cities, they account for a much larger share of caregivers and health technicians. In California alone, nearly 20% of registered nurses are Filipinos. [Stat News]