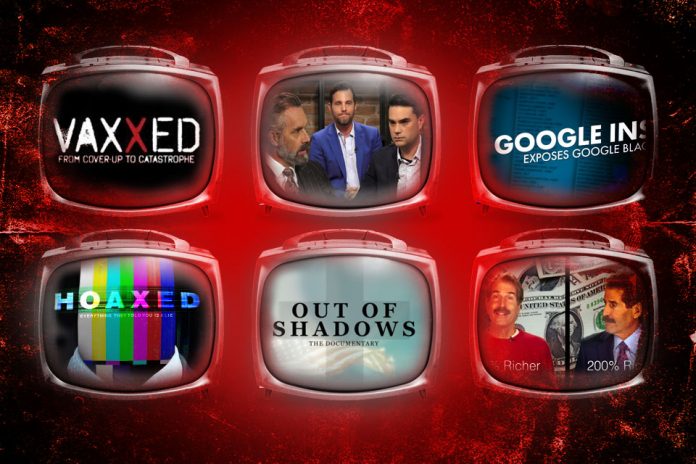 Out of Shadow, PragerU, Peterson, and Cernovich expose how few companies control mainstream media to manipulate news—and why you shouldn’t just believe what you hear or see

Out of Shadow Expose Lies of MSM & Hollywood

The Out Of Shadows documentary lifts the mask on how the mainstream media & Hollywood manipulate & control the masses by spreading propaganda throughout their content.

Their goal is to shed light and open minds with the apparent lies and brainwashing of an enemy with a sinister plan. The group Patriots created the documentary with the sole purpose of getting the truth out.

→ The demonic influence of ultra-liberal ideology.

A whistleblower has come forward to expose Google’s hidden editorial bias, and a massive cache of internal Google documents has been released via Project Veritas. It reveals the demonic left-liberal agenda that’s twisting young minds.

Led by academe, scientists, professors who stand on conservative, mostly Christian values. One of its critical academic resources is Professor Jordan Peterson.

A Glitch in the Matrix

“A Glitch in the Matrix” on the Intellectual Dark Web is about the relationship between truth and reality. It reveals the ideological blind spots of MSM (mainstream media). It exposes the existential threat of polarization—seen through the lens of Jordan Peterson viral interview with Cathy Newman on Channel 4 News.

The documentary exposes fake news and explores how misinformation spreads online in conversations with celebrities. Hoaxed is a collection of original essays – some snarky, some serious, and some gossipy. It interviews high-profile media figures.

Del Bigtree exposes the apparent vaccine dangers and side effects. The video focused on autism as a direct result of certain vaccines. The docu-video reveals the admission of former CDC officials and expert doctors’ opinions on the claim’s validity.

Politicians and reporters often rail about “the rich getting richer and the poor getting poorer.” But John Stossel explains it’s not true. A report indicates that the incomes of poor and middle-income Americans are up 32% since the government began keeping track several decades ago.

New York City mayor Bill DeBlasio warns: “There’s inequality in this country right now that is threatening to tear us apart.” Stossel says that it might tear us apart—but only if people come to believe that ALL inequality is evil. But it isn’t, Stossel explains.

The list of disturbing far-left media bias is too crowded not to miss. Conservative sources are reportedly underrepresented in search engines if not removed for being dangerous or misleading — according to “liberal fact-checkers.”