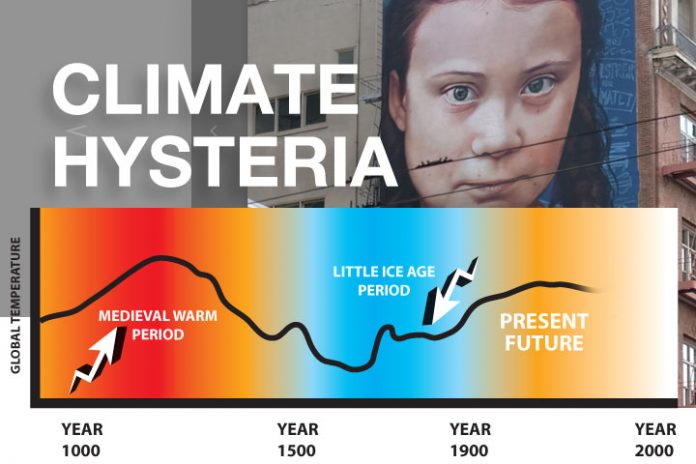 Climate change is REAL. It’s been a natural cycle for the last 2,000 recorded history. Today, it’s being used by Liberal Democrats to promote climate hysteria. They are conditioning young minds and using young people like Greta Thunberg to blame climate change on capitalists.

Scientists disagree that Global Warming should be blamed on carbon emissions. True, we should reduce CO2 by utilizing natural energy, but the drastic call to cut its use is unthinkable.

Atmospheric science professor and physicist Richard Lindzen explains, “There is no evidence that CO2 emission is the dominant cause of climate change.” Also, to say that “97% of scientists agree on climate change” is untrue.

Bjorn Lomborg of Copenhagen Consensus relates other data indicates sea levels rising, but not accelerating. Likewise, there are places that drought may have increased but also decreased.

Naturally, it’s difficult to believe a handful of a few “dissenting scientists” versus the consensus of NASA, UN, the French, Russian, and the Japanese Academy of Science. Who dares question climate change? However, many scientists have been wrong in the past.

Blame it on industrialization and capitalists

Scientists modeled greenhouse (carbon) gas emissions on changes in the Earth’s climate from 1850 to 2500, which was caused by industrialization.

They theorized this is causing global temperature and sea level to rise. They also said reducing emissions won’t help much because it’s too late. [Nature Report]

All life is carbon-based

All of the carbon in the fossil fuels we are burning for energy today was once in the atmosphere as carbon dioxide before it was consumed by plankton in the sea and plants on the land.

Coal, oil, and natural gas are the remains of plankton and plants that have been transformed by heat and pressure deep in the earth’s crust. In other words, fossil fuels are 100 percent organic and were produced with solar energy. [Truth about CO2]

→ Greta Thunberg is a bad example for kids.

Natural cause of Climate Change:

In 2007, BBC confirmed that the Arctic would be “ice-free” in five years. By 2013, NASA images indicated ice cap recovery. In the mid-70s, ocean scientist Jacques Cousteau rebuked US Representative Rohrabacher.

Early climate scare has been on and off throughout the century. Tree-ring records in the late mid-1800 showed temperature weakening (before CO2 was a thing), winters were becoming warmer.

In 1989, the AP New U.N. environmental official reported rising sea levels could wipe out entire nations if the global warming trend is not reversed by 2000.

They also said that governments only have this 10-year window of opportunity to solve the greenhouse effect before it goes beyond control. That’s 20 years ago, and not a single nation has been wiped out.

As of 2019, NASA reports that the temperature is up at 1.9 F since the 1980s. That’s nothing compared to temperatures during Medieval Warming. Sea is rising at 3.3 mm per year, and it’s not because of Global Warming. It’s more complex than that.

Research shows that there is no experimental evidence for the significant anthropogenic climate change. (Kauppinen and Malmi)