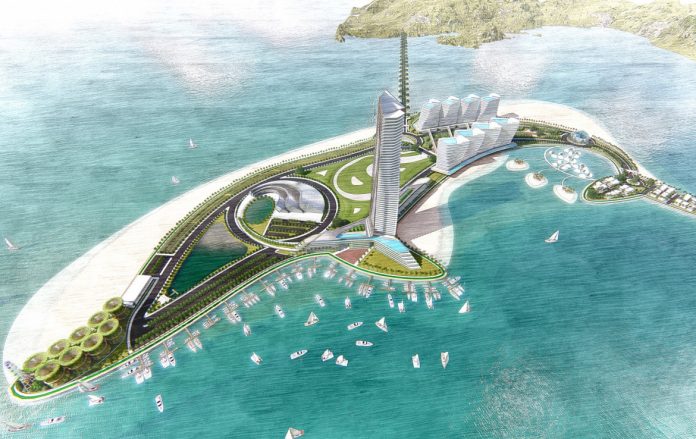 Multi-Billion Reclamation Development on Cordova, the “Sentosa of Cebu”

Brace yourself, Cebuanos! Cordova set to be the next best destination in the Philippines. Dolphin Islands is a blend of residential, mixed-use area, and commercial development set to open in 2028! Separated by water from the southern coast of Mactan Island, Cordova is a quiet, less urban that’s abundant in marine resources.

The traffic between Mactan Airport and Cebu City is getting worse, and development needs to expand elsewhere. Cordova is perfect for sustainable development that incorporates careful and responsible business and recreational planning.

Design Concept of the “Dolphin Island”

Dolphins can be seen around the vicinity. As a jumping point, MASA Group will develop a world-class and luxurious eco-tourism destination, unrivaled anywhere else in the Philippines.

It will be a modern and green architecture that utilize eco-transportation, and sustainable energy. More importantly, it will make use of local and natural sustainable materials.

One of the main concerns, of course, is the possible destruction of Cordova’s natural eco-system. Learning from the past, developers, and the city government at this point is already being held accountable.

According to Sun Star Cebu, a $2 Million feasibility study was conducted by the SM Group of companies to ensure that the promise of a healthy eco-system will be sustained.

Development of the 160 hectare property

SM Group of Companies will also be in it to develop its 1,500-hectare reclamation project. The Municipality of Cordova in the island of Mactan is poised to be the ‘Sentosa’ of Cebu. Dolphin Island, Cordova, and its reclaimed islands will be divided into four artificial island zones.

Sentosa of Cebu, the “Little Singapore of the Philippines”

Henry Sy Jr. of the SM Group told the head of the Presidential Liaison Office, Secretary Sitoy and Cordova Mayor Mary Therese Sitoy Cho, that there will be canals and bridges like those in Venice, Italy.

The main theme structure and design of ports and the business models patterned after the Sentosa Island of Singapore. “That’s why we will call that a ‘little Singapore’ in the Philippines,” Sitoy said.

Parks and natural flora and fauna will be the main feature of the well-planned zones. Of course, it will include a road network for both pedestrians, bikers, joggers with water features, and boardwalks around the public areas.

Cordova also takes pride in its abundant marine resources and habitats. As the municipality lies on the southern coast of Mactan Island, both districts have a similar culture, which is fishing and their admiration for marine biodiversity.

Cordova aims to be the “Crown Jewel” of Metro Cebu. Target completion of the multi-billion project that includes the four artificially-made island zone is in 2028.

History of political parties and bipartisan politics in the...