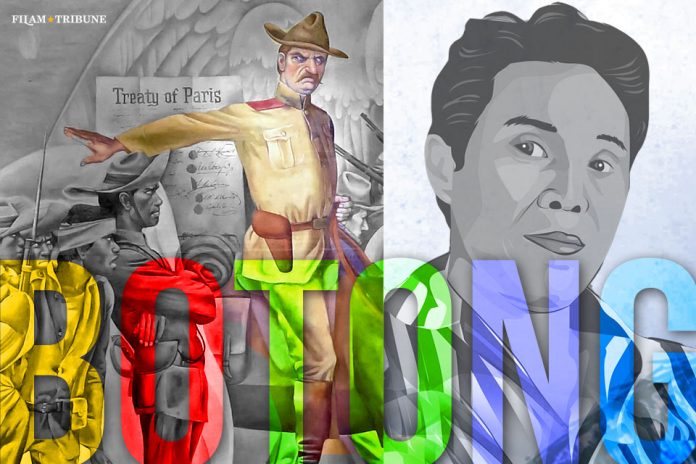 Botong Francisco’s grand mural painting, “Filipino Struggles Through History,” declared a National Treasure—struggles on its own

National Artist Carlos Modesto “Botong” Villaluz Francisco (1912-1969) is known for his grand murals. His big break was winning first prize at the first national exhibition of the Art Association of the Philippines (AAP). Purita Kalaw-Ledesma established AAP in 1948.

In the same year, Botong also won first prize at the Philippine National Museum’s annual exhibition of Philippine Art for his painting “Kaingin.”

​​Francisco grew up in Angono, Rizal. Fascinating, several artists hail from this town. His father made and sold wine but died when Botong was only five. He was able to study at UP but had to stop. He worked as an illustrator in La Vanguardia and the Manila Tribune.

Botong was a member of the “Thirteen Moderns,” a group formed in 1938. The group broke away from the classical tradition.

As one of the first generation of Philippine modernists, along with Victorio Edades and H.R. Ocampo, the three became known as the “Triumvirate.”

The three artists were commissioned (recommended by Irineo Miranda, “Dean of Philippine Cartoonists.”) to create a series of murals that depicted stylized Filipino imagery.

It adorned the lobby of Capitol Theatre, designed by National Artist Juan Nakpil, the Dean of Filipino Architects.

The mural “Rising Philippines” (1935-39) was a narrative of Philippine history leading to the Philippine Commonwealth. Unfortunately, it was destroyed during the war. Henceforth, Botong is known for this style of painting.

Botong Francisco’s most famous work is the “Filipino Struggles Through History.” Manila Mayor Villegas commissioned it in 1964. The seven panels were finished months before his death on March 31, 1969.

It is the most recognized cultural Filipino painting because of its fluid style, color, and composition. It reflects the most artistic interpretation of Philippine history, customs, and traditions.

The painting was declared a National Cultural Treasure on April 8, 1996. An “Obra Maestra” retelling the 600-year history of the Philippines.

The panels of “Kasaysayan ng Maynila”

The mural is divided into seven’ oil on canvass’ paintings measuring 80 meters long. These are conjoined to depict ten critical events in Philippine history. Collectively, it was originally titled “Kasaysayan ng Maynila” (History of Manila).

Datu of Maynilad and the barter system

The first story from the left depicts the trading and barter system between Chinese merchants and Arab traders. Below are the ethnic Filipino fishers. It moves to Datu of Maynilad and unto the arrival of the Spaniards who brought Christianity.

THE POLITICIZATION OF THE CHURCH IN THE PHILIPPINES.

Rajah Sulayman flows to the “cross of conquest” and the “sword of Spanish oppression.” As the Spanish conquistador raises his cup for a truce, the Datu sits and ignores the colonizers begrudgingly.

The painting progress to Lim Ah Hong and the three Spanish authorities—Gobernador, Friar, and General. Beside them is the Galleon trade.

The ‘Manila Galleon trade‘ dominated the Pacific ocean and the “known world” for over a century.

The Lady of Peace and Good Voyage, brought by Governor-General Taboro, guides the Galleon ships that sailed from Manila to Acapulco.

HISTORY OF FILIPINO IMMIGRANTS TO THE USA.

The following section was the war and truce between France and Britain and the short British occupation of Manila and Cavite. Amidst the Manila Galleon trade is the Virgin Mary.

The panel moves to Francisco Balagtas, where Florante and Laura (malakas at maganda) are depicted.

One of the highlights of the painting is the death and execution of “GomBurZa.” On its side are the struggles of Filipinos during Spanish colonization, symbolized by their resistance and heroism.

The story progress towards the revolution where National Hero Jose Rizal, in despair, writes “Noli Me Tangere.” Around him are the characters of Simon, Maria Clara & Elias, Sisa, Crisostomo & Basilio, Pilospong Tasyo, and Padre Damaso.

THE FIRST FILIPINOS OF AMERICA.

Gat Jose Rizal faced the firing squad, and his death ignites the revolution. The painting emphasizes KKK (Kataas-taasang, Kagalang-galangang Katipunan), the rise of Filipino patriots during the “himagsikan.”

Then comes the fearless Andres Bonifacio with the loyal “katipuneros.” They were the unsung heroes of the revolución.

Treaty of Paris and American colonization

Americans entered the scene with the Treaty of Paris in 1898. After Spain left, a brief war of independence against the Americans ensued. However, the Americans were portrayed not as conquerors but as the country’s deliverers.

Japanese invasion and the Commonwealth

The following story show Manuel Quezon with Manuel Roxas during the commonwealth inauguration of the Philippines in 1935. Then comes the Japanese invasion of 1942.

As the Philippines was liberated and declared independent in 1946, American and Philippine flags were painted to show appreciation, partnership, and the freedom Filipinos today enjoy.

THE COLORFUL FIESTA OF THE PHILIPPINES.

In 2014, “Filipino Struggles Through History” murals were transferred from the Manila City Hall to the National Museum.

The grand mural’s home was initially displayed at the ‘Bulwagang Gat Antonio Villegas’ of the City Hall. However, it deteriorated over time.

In 2013, Mayor Alfredo Lim sent the panels to the National Museum for extensive restoration.

reach a larger audience to appreciate the National Treasure.

Mayor Estrada and the National Museum

In 2017, Mayor Joseph Estrada and the Manila City Council signed an agreement with the National Museum to leave the paintings at the museum.

Doing so will reach a larger audience to appreciate the National Treasure. In exchange, high-quality reproduction replaced the originals at the Bulwagan.

It took four years to restore the paintings. On February 19, 2018, the murals were opened for public display for the first time.

The battle for Botong’s paintings

In 2019, Mayor Lito Atienza invited to the inaugural ceremony of current Mayor Isko Moreno Domagoso. He felt disgusted that a tarpaulin had replaced the painting. Atienza demanded the murals returned to their rightful place.

Domagoso echoed the sentiment. As acting trustee for the painting, the National Museum acknowledged the return. Unfortunately, the pandemic struck.