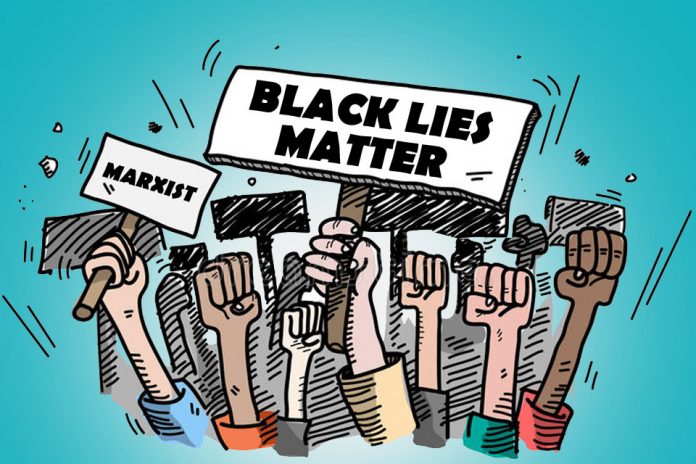 In this video, Black conservative Candace Owens said, “The whole concept of racialized police brutality is a myth. All you have to do is sit down and do basic mathematics to discover that the entire narrative that we have been told is a lie.”

At the height of the riots, Candace said in her Facebook post, “We allow our Black youth to be programmed by Satanic media that tells them they will never be anything…, MIGHT AS WELL lead lives of anger, crime….“

Prominent Black educators Dr. Carol Swain and Dr. Thomas Sowell agree racism in America is directed to something more sinister. Media propaganda is manipulating our minds, claims the Out of Shadow documentary.

Even UK’s Equalities Minister Kemi Badenoch condemned BLM and the Critical Race Theory or CRT. It encourages “white guilt” and views blackness as victimhood and whiteness as oppression.

“We don’t want to see teachers teach white pupils about white privilege and inherited racial guilt,” she said at the House of Commons 2020.

In 2021,  a San Francisco restaurant owner and staff asked three armed police officers to leave because their weaponized uniforms made them uncomfortable.

The trend of police hatred by defunding police gained traction in 2020. White police were labeled racist, and the spike of Blacks killed by police broke the dam.

However, recent data show police officers who encounter violent suspects (from any racial group) have a greater chance of being shot, regardless of race.

According to a WSJ report, research by Harvard economist Roland Fryer Jr. found no evidence of racial discrimination in shootings.

no evidence of racial discrimination in shootings

Most police see Black men as troublemakers, suspects, or likely on probation. Blacks get stopped 10-times more, arrested 26-times more, and killed at 5-times the rate of others. Statistics show Blacks (13.4% of the US population) appear more belligerent than other races. [Crime statistics]

Blacks are more likely to kill cops than be killed by cops.

Data on all offenses indicate why Blacks are frequent targets of prejudice by police, 2019

Police shooting occurs more with Blacks because they commit more than 50 percent of the USA’s robberies, murder, and assault. [PragerU]

Violence among Black-on-Black exposes Black belligerence and recidivism. There are many law-abiding and peaceful Black citizens, but most lawbreakers arrested blame it on “systemic racism” rather than acknowledging the need to be law-abiding.

Why are Blacks prone to committing more crimes than others

Less than 20% of African Americans were raised by two parents, a clear reason Blacks are prone to commit more crimes than other groups. The growing number of school dropouts that end in low-income jobs are contributing factors.

In contrast, Asians have the lowest incarceration and the lowest single-parenthood rate. They are also highest in SAT and most educated, as well as household income. [Pew]

Asians have the lowest incarceration and the lowest single-parenthood rate.

Mainstream media (MSM) perpetuate racism. For example, MSNBC guest host Tiffany Cross said, “If you are not a person of color, and millions of people of color…are saying a thing or person is racist, it’s really not your place to say it isn’t.” That’s using the “Black Race Card.”

As racism recedes to near insignificance as an impediment to success, those who profit from the belief in and perception of “systemic” racism must necessarily invent “new,” “newer,” and “newest” ways of describing it, tweets Larry Elder.

In July 2020, Bob Kosto, a county firefighter, was fired after his racially insensitive and violent social media posts. He said Black Privilege is the “ability to break every law in the country and remain the victim.“

Black slavery and racism were terrible pasts in America. Since the 1960s, a lot has changed. Today, Blacks have more privileges than Asians or any other minorities.

Candace Owens explains why the Left continually invokes racism instead of doing something truly positive to help the Black community.