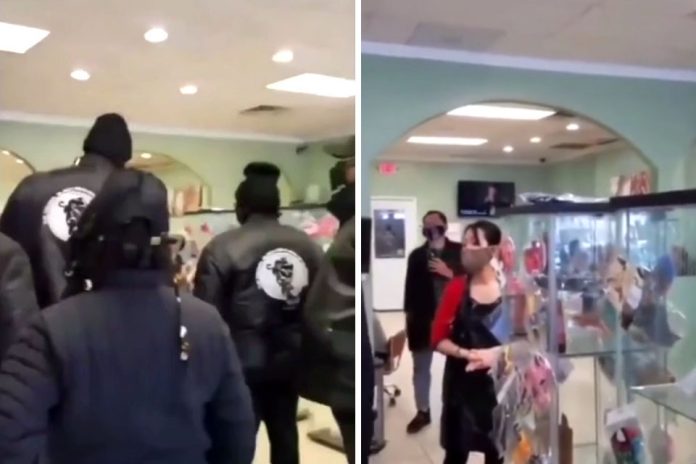 “Original Black Panthers of Milwaukee” threaten Asian-owned business: “We will permanently shut you down!”

A salon that appears to be owned by Chinese immigrants had an encounter with a black woman. Apparently, there was an altercation. Someone in the shop called the woman “bitch.” There were threats to call the police on the black person involved.

Threats were made by a group of at least five blacks wearing “Black Panthers” who stormed the place. They defended the “disrespected” black woman. As to why would the Asian call the police and call the black woman bitch is unknown at this time.

Why would the Asian call the police and call the black woman bitch is unknown.

“You’re disrespecting Black women in this community by calling her a bitch.”

“Calling the police on her, telling her to sit up, and disrespecting Black Lives Matter.“

“Do I make myself clear?”

“Don’t let anyone in here while I am talkin…”

No Justice No Peace

The black man wearing dark shades and a huge spiked necklace did most of the talking. He asked a Chinese man, are you the owner? The Chinese man ignores him and walks away.

“I’ll be back. Make sure you tell him to get here (whoever the owner is),” the black man said.

Turning to another person in the salon, the black guy said, “And you (pointing) if you ever disrespect a black woman, we’re gonna shut you out (calling a black woman bitch).

“Yeah, I am talking to you. You know you did it… (as the other men laugh).” Before they left, the group chanted, “No justice, no peace,” six times.

The Original Black Panthers of Milwaukee

In 1966, the Black Panther Party (BPP) was organized for Self-Defense, founded by college students in Oakland, California. The Original Black Panthers (OBP) in Milwaukee have not indicated a connection with BPP.

The video shows they are with the BLM (Black Lives Matter) cause. OBP groups are in North Eastern L.A., Ashland N.C., Dallas, N.E. Louisiana, and Tulsa.