BBM: Rise of the Phoenix or Aquino karma? 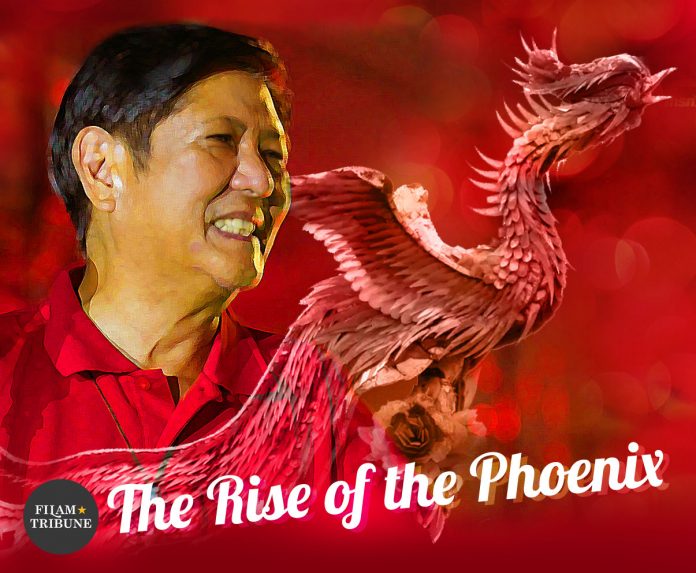 Bongbong Marcos Jr., the rise of the phoenix, or the Aquino karma?

Rising from the ashes

The wheels of change turned south from the once-mighty yellow to a failed legacy. Just before Marcos Jr. became the country’s president, the opposition’s yellow color turned pink—signaling the fall of the house of Aquino.

For almost four decades, atrocity and corruption have been attached to Marcos’s name. Books have been published and read in schools to educate young students on how evil the Marcoses are.

As a result, a high turnout of Millenials rooted for Bongbong Marcos Jr.’s (BBM) closest rival. Still, BBM topped surveys by a wide gap—consistent with the final count. Like a phoenix rising from its ashes, Marcos has returned.

Gulong ng Palad: The fall of the house of Aquino and the rise of BBM

The Filipino salawikain “Gulong ng palad” (the wheel of fate) was a television drama from 1977 to 1985, popular during the Marcos era. It depicts the life cycle that when one is on top, the only way is down, and vice versa.

Ferdinand Marcos rose to power and ruled the country for 20 years. He lived to the full but died with heartache and condemnation. On the contrary, his political rival Cory Aquino lived a well-spent life and was left with honor and praise.

Cory would have ended the Marcos story. After all, Ferdinand and his wife Imelda had been permanently inducted as the world’s greatest thieves—while Corazon Aquino the icon of democracy.

The saga of “Philippine fiesta politics” assures us that nothing is permanent in politics.

It was apparent that Marcos would never rule the country again. After all, the score was settled in EDSA in 1986. However, when the “last Aquino” died in 2021, it was as if karma played its role and enabled Marcos Jr. to return to Malacañang Palace.

Spin doctors pushed the “Marcos Golden Age” and that Martial Law was solely about destroying communism. But the Aquino era was marked by incompetent leadership. Therefore the latter was no better than the previous.

End of the yellow movement

The last of the “yellow presidential candidates,” Mar Roxas, faced an overwhelming defeat in 2016. He reportedly regretted being associated with the Aquino’s “yellow movement.”

The return of Marcos to Malacañang in 2022

It was a slap in the face of the Aquinos when President Duterte allowed the burial of Marcos Sr. at the Heroes Cemetery. The cry was loud because it delegitimizes the EDSA People Power. How can a murderer and kleptocrat be a hero?

Perhaps too much hatred drove Pinoys to sympathize with the Marcoses. They never retaliated as the yellow army spewed more hate than unity. After all, we reap what we sow.

As the world condemns the Marcoses to ashes, the phoenix rises and is made stronger by the very movement that killed them in the first place.