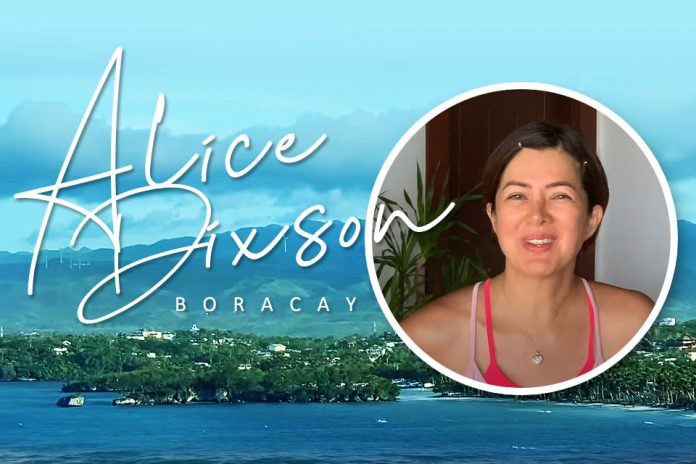 Alice Dixson gives a private home tour of her house in amazing Boracay!

Alice Dixson (often misspelled Dixon) gave an exclusive virtual tour of her private beach house in Boracay. The “Palmolive girl” who sang “I can feel it” indeed can with her incredible view of the white sands of Boracay inside her private home.

A blue-glazed pool welcomes you upon entering the home’s main gate. The house interior is modern, with a hallway leading to the kitchen. Alice also showed her bedroom and, of course, where her labrador “Blondie” loves to stay.

Alice is a very private person and only gave two interviews at her own home. For decades, magazines, TV, and other media have been wanting to peek inside her house. The Filam actor, model, and former beauty queen recently turned 51, and yes—still gorgeous and curvaceous.

Born in the USA, Jessie Alice Celones Dixson, her mom is Filipina and dad American. She chose to stay in the Philippines for good after winning Miss International in 1986. In December 2013, she posed for FHM Philippines, making her the oldest woman to appear on the cover of the men’s magazine at 44 years old—amazing!

Nope, it’s not in Sarangani or Cordova; it’s at the deck of Alice’s home overlooking Boracay’s residential side. Alice has been living in Boracay since last year after she turned 50. Her home in Manila remains to be her permanent resident. However, with COVID-19 restrictions, Boracay is the perfect place for her.

Although unconfirmed, rumor has it that she’s been dating, if not the wife of one of Crimson Resort & Spa Boracay’s executive with initials “G.S.,” her prince charming.

Currently, Alice Dixson is a licensed realtor in Canada and Florida, but she frequents the Philippines, who she calls her home. In 2019, Alice starred in Madrasta and Beautiful Justice via GMA Network in 2018. She was married to Ronnie Miranda but divorced in 2013. Since then, Alice resumed her low-profile showbiz career with ABS-CBN.

Ms. Alice Disxon is part of ABS-CBN’s Ang Probinsyano, and teleserye Ngayon at Kailanman and the movie Nuuk set in Greenland produced by Viva Films with Aga Mulach released in 2019.

Boracay reached its full capacity for local and foreign...
People