The Clergy vs. Duterte & Marcos 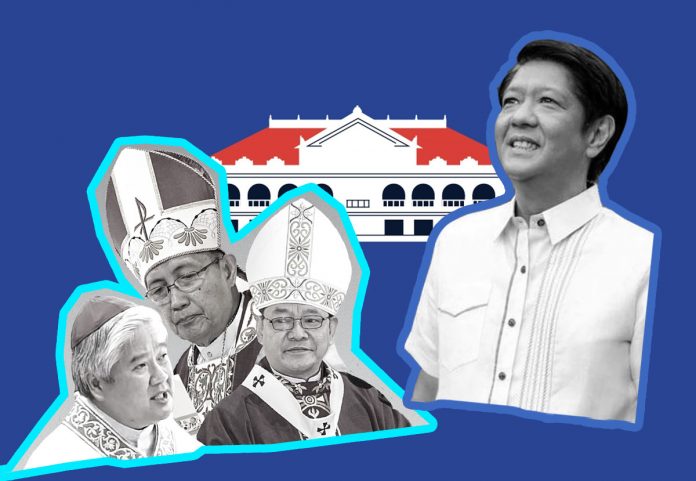 A new war brewing between the church, the “new Marcos,” and Duterterism

Atrocities and corruption are associated with Marcos, Duterte, Estrada, and Arroyo, but their primary opponent is not exactly the people but the church. For decades, the clergy has called on citizens to condemn leaders through en masse protests.

The power of the Catholic church

Cardinal Sin encouraged People Power that removed President Marcos Sr. in 1986. In EDSA Dos, the Catholic Bishop’s Conference of the Philippines (CBCP) successfully influenced the removal of Estrada, which they admitted in 2008.

However, CBCP stopped short with President Arroyo after being reprimanded by the Vatican. They called for the resignation of another elected sovereign leader.

Since the era of Cardinal Jaime Sin, Catholics have always meddled in politics in the name of righteousness. Moreover, they attribute their “political victory” to the Catholic Mary. The reason the EDSA shrine was built.

The house of Aquino and the church

The Aquinos and the Catholic church have always supported each other for decades. However, the changing of Yellow to pink and Marcos Jr.’s landslide victory are clear indications of the fall of the house of Aquino and the rise of Duterterism.

Almost all the Philippines’ past presidents were Catholics, except for Fidel Ramos, a protestant. Duterte was neither. Unlike Duterte’s predecessors, he refused to kowtow and instead rebuked the clergy by calling the Catholic God “stupid.”

If the setting were in the middle ages, the papacy would have burned him to the stake.

The war between the church and Duterte was waged, but for the first time, the church and the “Yellow supporters” failed to encourage an uprising (against Duterte). Even when the two Aquinos were still living, their influence faded evident in EDSA People Power celebrations.

Marcos returning to Malacañang was too much to risk.

The first issue that the church may intervene to could be to stop changes in the 1987 Constitution by the Marcos administration. Past President Cory Aquino was responsible for the charter change, together with Catholic church leaders.

Attempts to revise it in the past and introduce a Federal form of government have been unfruitful. However, the tandem of Marcos Jr. and Duterte will likely push for a constitutional commission to make these changes.

The fourth branch of government

The loud voices of Christian groups in politics are CBCP, NCCP, PCEC, and now CCF through CVM, who were called to evangelize. However, the return of Marcos loyalists and Duterterism may force them to take a new role as the “fourth branch of government.”