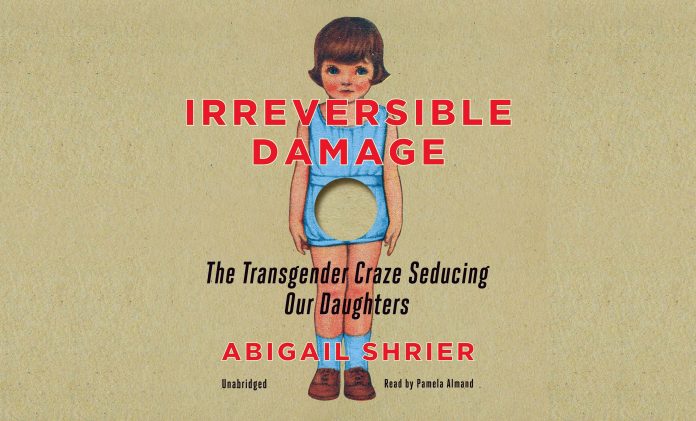 In 2020, Sean Scott, a National Association of Science Writers (NASW) member, was expelled from its online forum for mentioning the book – Irreversible Damage: The Transgender Craze Seducing Our Daughters written by Abigail Shrier.

Scott has not even read Shrier’s book but merely mentioned it because it sounded interesting. He was immediately banned from the forum and labeled transphobic, Shrier said in this video.

She concludes Gender Dyphosria and Critical Race Theory (CRT) are tied together. Its end goal is chaos and irreversible damage to young children brainwashed by the left.

Shrier graduated from Columbia College, the University of Oxford, and Yale Law School.

GENDER DYSPHORIA AND CRITICAL RACE THEORY ARE TIED TOGETHER.

In 2022, the trend of young girls surgically removing their breasts (reduction mammaplasty) exploded. Their liberal parents, doctors, and the state have empowered them to transition fully.

Gender is no longer defined by biology but by feelings.

Genital removal surgeries can start at 17, including womb and testicle removal, a year earlier than previous guidance. [AP]

Recently, a significant movement of liberal-left Pediatrics and psychiatrist believe their primary job is social justice—and they don’t hide it, Abigail said.

For example, America’s most prestigious Hospital, Brigham and Women’s Hospital in Boston, recently announced that it would offer preferential care to patients based on race.

Endocrinologists, psychiatrists, pediatricians, and scientific researchers who pointed out gender interventions’ risks were discriminated against.

Shrier relates how they struggle to get their research into journals. Very often, their journals and letters aren’t published. Instead, the funding goes to research that promotes gender transition and downplays the risks.

IS THERE A GAY CURE?

Although parents are waking up against this craze, progressive liberals have instituted laws protecting these ideologies. In 2021, the Biden-Harris administration launched the Gender Equality Act.

In 2015, the Drag Queen Story Hour rolled out transgenders to teach young children about the value of being LGBTQ.

In 2022, conservative authors started to fight back against what they see as the indoctrination of young minds.

Mainstream media is also helping get the word out that gender surgeries and chemical castrations are fully reversible. However, it is not.

The traditional nuclear family is being redefined as having two or three people of the opposite or same sex with a trans child, regardless of the age gap.

Three reasons why school districts are implementing a 4-days...
Family and Education