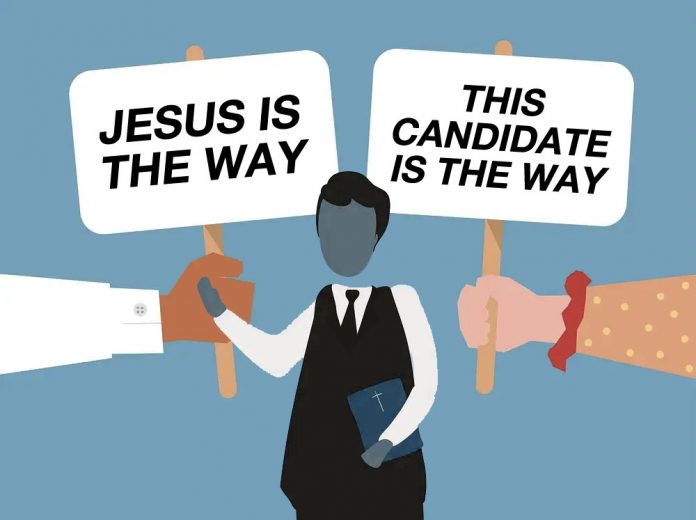 The intention of evangelical leaders in the Philippines to curb corruption and install “righteous leaders” is noble—but is this the way of the apostles? The Bible tells us that righteousness in government would only happen when Jesus returns to rule as King of all nations.

1. It can get in the way of evangelism

Generation Z is the least religious generation, according to Pew Research. More and more people are disinterested in the teachings of Jesus. To teach them “moral values” under the pretext of bipartisan politics is an earthly aspiration—not spiritual.

Yes, We need Christians in the government and every sector of society if we are to influence the nation. However, if one is called to pastor a church—talking politics gets in the way of the Gospel mission.

If God calls a religious leader to run for public office, do so but relinquish the role as a clergy because the disciples of Christ are called for a higher purpose.

To teach “moral values” under the pretext of bipartisan politics is earthly aspiration.

POLITICAL TOLERANCE IN THE PHILIPPINES.

The Separation of state and church is evident in the Bible

The Old Testament describes a “decentralized governmental system” and a jurisdictional separation between Church and State. For example, the Jews were governed by the Sanhedrin, but they were still under the civil imperial Roman government. [Separation of church and state in the Bible]

Evangelicals in America endangered the Gospel

In the USA, influential Christian figures immersed themselves in bipartisan politics. Unbelievers criticized them for pushing religious faith into the government domain. It did nothing to prevent demonic left-liberal ideology from devouring the country.

Atheists were challenged after the church insisted that the government adopt religious values. In the end, the constitution was used to remove prayers in schools, legalize same-sex marriage, and the Bible removed.

Church membership has also rapidly declined while militant LGBTQ+ wage war against the nuclear family and indoctrinate children with their immorality in the name of “progressive politics.” Politics cannot solve moral decay.

Chinese Christians veer away from politics

In China, Christians do not have religious freedom. Instead of pastors telling them what their communist government should do.

They focused on discipleship because a soldier refrains from entangling himself in civilian affairs to please the one who enlisted him. (2 Timothy 2:4)

Today, Christianity continues to thrive in China, despite persecution.

In 2022, Christ Commission Fellowship (CCF) senior pastor Peter Tan Chi said that Christians should discuss and be involved in politics.

“Shame on us, politics should be discussed… these are important topics. Many Christians are brainwashed into thinking politics is dirty; you don’t get involved; that is a lie. If you study church history, you can see how Christians who entered politics have transformed their nation.” [Work to make a difference]

It immediately empowered church members from CCF to criticize members who supported Marcos Jr., who they called “a thief.” Some pastors and pastors’ wives dove into the mire of political debate.

The ranting and shaming left a bad taste in the church. The point is that politics divide.

Since 2016, Christians who support the “Yellow Movement” have been “at war” with members who supported President Duterte. The return of Marcos is a clear threat to them.

The apostles taught never to accuse anyone, to be courteous, and avoid quarreling (Titus 3:2). Make it an ambition to lead a quiet life (1 Thessalonians 4:11), and don’t entangle yourself with civilian pursuits. (2 Timothy 2:3–4)

Jesus didn’t speak out on any political issue of His time—instead rebuked religious leaders.

Jesus didn’t speak out on any political issue of His time.

3. It’s a disservice to the mission of the apostles

Several mission groups and devout Christians in the 18th and 19th centuries paved the way for social justice and reforms. To use them as an example to justify pastors involved in bipartisan politics is pride and folly.

“Nothing in His (Jesus) teachings gives even the slightest hint that He had any political involvement,” said apologist Don Stewart.

There is no example of Jesus or the apostles demanding changes from their evil government. Instead, they preached submission to authority, even to unreasonable ones. They acknowledge that God instituted ALL human authorities. [Romans 13 Commentary]

Renowned apologist John MacArthur uses scriptures to point out sin and evil ideologies in every sector of society—but God’s solution is the Gospel, not politics, he said.

“We would fight if the kingdom were of the world to make sure we got our space in the world. But this is not a kingdom that is part of this world; this is a kingdom of another world.” [MacArthur, “Our King will not be mocked,” 2021]

Apologist John MacArthur said that moral decline is a spiritual problem, not political, and its solution is the Gospel, not partisan politics.

God’s solution is the Gospel, not politics.

4. Christianity is not invincible in the Philippines

Even if churches like CCF continue to accelerate membership and PCEC members grow in church numbers, the country is facing a rapid moral decline, and “righteous politics” cannot save them.

South Korea in the 1980s was the beacon of spiritual revival. Today, churches lose young congregants who see religion as irrelevant. We see the same pattern in the Philippines as Catholic attendance declines. [UCA]

For now, the Philippines remains predominantly religious—but that number will not last long. Eventually, more liberal lawmakers who push anti-Biblical morals may be elected.

The only way to prevent a corrupt and liberal ideology in the government is with a spiritual revival—not political rallying using a public “prayer vigil” as an excuse.

Vowing for political change that amounted to nothing

Despite vigils mostly led by evangelicals—none of the Liberal opposition candidates won.

Moral decay is a spiritual problem

Moral decay is not a government issue but a spiritual problem. The only way to push values in legislation is if lawmakers know and love Jesus. Likewise, an effective “Christian values moment” should detach itself from politics, not embrace it.

Atheism under the guise of “free thinkers” and “humanists” satanic groups is growing. The political landscape has nothing to do with it, either.

How Americans see clergies in politics

The atheistic left-liberal wing of America and the equally atheistic mainstream media desperately linked Christians with “Trumpism” in 2021. As a result, Christians were labeled right-wing extremists.

The aftermath: Polls show evangelicals’ slavish devotion to bipartisan politics is the chief cause of the decline of religious belief.

Recently, left-liberals coined “Christian nationalism” as a pejorative for Christians.

The bottom line, the government we have on earth cannot prevent moral decay. Jesus’ theocratic government is yet to come. The issue has always been spiritual, and we deal with it with spiritual things.

The issue IS spiritual, and we deal with it with spiritual things.

WHAT HAPPENED TO THE PHILIPPINES?