Difference of Left-Liberal and Right-Conservative 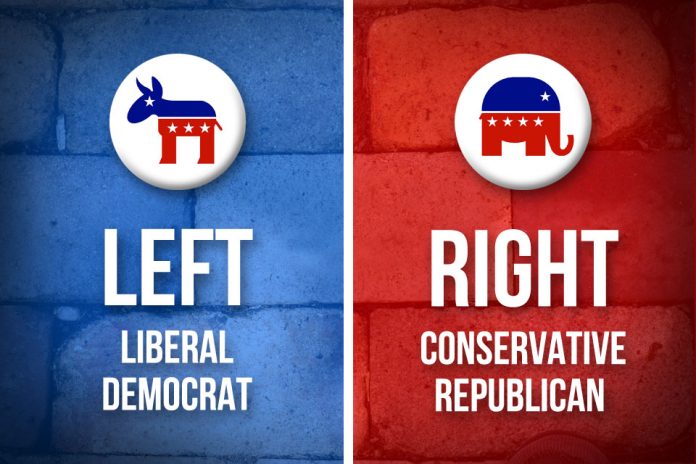 What Left-Liberal-Democrat (DNC) vs. Right-Conservative-Republican (RNC) believe and stand for

6-Most contentious policies between Right-Conservative and Left-Liberals

Prairie Fire said, “Progressives (leftists) are burning cities (by endorsing BLM riots) and looting small businesses as part of their attack on capitalism.”

On the other hand, “capitalism is an anti-poverty program,” said the Democrat-led American experiment. Prager U’s video below explains why capitalism is pro-poor and better for the world.

Most conservative Republicans support LGBTQ rights but are anti-gay marriage. It took nearly 226 years for the Supreme Course, established in 1789, to decide in favor of same-sex marriage.

In 2020, a new poll showed that most Republicans support same-sex marriage for the first time. In the same year, church attendance declined to a record number for the first time— while Pope Francis was the first “vicar of Christ” to support gay marriage.

LGBTQ MILESTONES: THE GAYING OF AMERICA.

3. Abortion is Health Care vs. Pro-Life

Most Conservatives believe a fetus is human. It has certain inalienable rights, such as the right to live. Therefore, a mother has no right to abort it. [God in US Constitution]

In stark contrast, the Liberal Left looks at a fetus as a “blob of tissue.” The choice of life belongs to the mother alone. Hence, it’s women’s health rights. Former Democrat President Obama stated that women should have ‘Dignity And Freedom’ to get abortions.

In 2021, Democrats pass a bill to fund elective abortions not just locally but for other countries using American taxes. House Speaker Nancy Pelosi, a Roman Catholic, defended the Democrats’ stand on abortion.

She said, “It’s none of our business how other people choose the size and timing of their families.” However, Conservatives consider abortion murder. “Abortion is a racist Democrat linguistic trick. It’s murder, not a choice,” tweeted Blexit founder Candice Owens.

In 2022, Democrat House Speaker House Speaker Nancy Pelosi said that private companies should provide travel expenses for their employees to have an abortion if Roe v. Wade is overturned and they are located in a state that bans the procedure.

In 2014, Pew Research showed that 89% of liberal-atheists lean toward Democrats. Although they shout for tolerance, some liberals want to remove Christian prayers and welcome Satanist invocation.

In 2019, a group of Democrats moved to omit “One Nation Under God” from congressional proceedings. Some Republicans, on the other hand, want to continue and recognize the “faith tradition” found in the Declaration of Independence and state constitutions.

In 2021 Democrat speaker Pelosi endorsed the ‘Voting Rights Bill. Earlier, her constituent proposed lowering the voting age to minors as young as 16. Republicans opposed the proposal.

In 1969, Democrat John Davoren, former Massachusetts Secretary of the Commonwealth, petitioned to abolish the Electoral College and maintain a direct popular vote. In 2019, Democrat Senators petitioned to end it out of fear that a Republican nominee may win again by electoral vote.

6. Border wall: To build or not to build

The partisan divide on whether to shut down or continue building the border wall, particularly between the United States and Mexico, was most tumultuous during the term of President Trump. Democrats refused to support expanding the border.

In 2021, as one of Biden’s major accomplishments, he proposed to give around $450,000 per person in compensation for “separated families” that the Trump administration severed. However, Republican Senators blocked the settlement payment.

CHRISTIANITY DECLINES IN THE USA.

The first political parties of the USA

The political parties of America formed on the issue of power and size of the federal government. They were known as “Federalists and Anti-Federalists.” [The Americans, Littell, p186]

Kansas-Nebraska Act: A defining moment for the new Republican and Democrat parties

In 1820, the Missouri Compromise prohibited slavery in states above the Missouri line. However, its repeal divided the territory of Kansas-Nebraska in 1854. The act split politicians from the Democrats and Whig parties—paving the way for a new Republican party.

In 2020, the riots and looting dominated by BLM were rooted in slavery. The insatiable thirst to compensate for Black atrocities appears to have led the Marxist organization to claim “Its reparation.” Today, both parties support Black rights and the Equality Act.

The first African-American members of congress were “23 Black Republicans.” By the late 1960s, the national Democratic Party abandoned its former support for “legal segregation.”

Who are Republicans and Democrats today?

Recently, many Republicans were labeled “white supremacists,” blamed on leftist media propaganda. The attack on Conservatives was evident among Trump supporters. Hence the phenomenon of Trump Derangement Syndrome.

Today, America’s two-party system is no longer defined by who’s anti or pro-slavery but by the moral values they hold for the most part.

HOW THE TWO-PARTY SYSTEM FORMED IN THE USA.